Top golfers face off in Thailand

Top golfers face off in Thailand 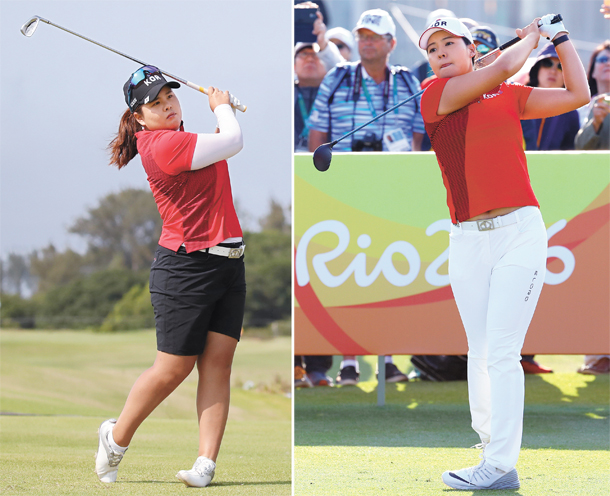 This year’s Honda LPGA Thailand tournament is shaping up to be one of the most competitive yet as 18 of the world’s top golfers descend on the Siam Country Club in Chonburi, Thailand, this weekend.

For Korean golfers Park In-bee and Chun In-gee, it will be their first LPGA event of the season.

With Park’s sponsor exemption, the former No. 1 golfer is returning to the tour after six months of rehabilitation from a left thumb injury.

Despite her absence in the second half of last season, Park still managed to accomplish a lot. She captured a career Grand Slam and won the first Olympic gold medal in the sport since it was reintroduced at the Rio Games last year. Not only that, after competing in the KPMG Women’s PGA Championship in June, she became the youngest player to qualify for the LPGA Hall of Fame, at age 27.

While she was absent from the tour, Park wasn’t able to practice for four months. But since December, she’s been back to her regular routine.

“I didn’t feel any pain,” Park said during a press conference in Thailand on Tuesday. “This is a positive sign, and I feel confident that I can play this season without any injury.”

Her absence from the tour affected her ranking. Park fell to 12th on the world ranking and finished 69th on the LPGA Tour 2016 money list, dropping from 2nd in 2015.

But Park didn’t seem too concerned. “Once I start playing in tournaments, my ranking will go up,” she said.

Park has had good results in Thailand, having won the event in 2013, finished runner-up in 2014, tied for seventh in 2015 and tied for 30th last year. Park will tee off on the first hole with Suzann Pettersen of Sweden and Ai Miyazato of Japan.

“My goal this year is to win another major tournament,” Park said.

Meanwhile, Chun In-gee, No. 3 on the Rolex World Rankings, is hoping to continue her stellar performance from last season.

As a newcomer on the LPGA Tour last year, Chun exceeded expectations, winning the LPGA Vare Trophy, awarded to the player with the lowest season scoring average, and Rookie of the Year. Coupled with her stint on the Korean and Japanese tours, she became the first player in history to win major tournaments from three different tours.

And with her win at the 2015 U.S. World Open (played on invitation) and the 2016 Evian Championship (as a full-time member on the LPGA Tour), Chun became the second player to win majors as her first two LPGA titles.

Heading into her second season on the tour, Chun is hoping to start strong. At the Thailand event last year, she finished runner-up behind Lexi Thompson of the United States, who will also be competing in the tournament.

Chun will tee off on the first hole with Pornanong Phatlum of Thailand and Lydia Ko of New Zealand.

Ko, for her part, is looking for redemption after a poor finish at the ISPS Handa Australian Women’s Open last week. Despite high expectations, Ko was unable to break 70 in the event, putting out a dismal score of 75 on the last day without a single birdie.

Another Korean player, Jang Ha-na, is one to watch, as she won the LPGA Tour’s second tournament of the season last week. She will tee off on the first hole with Ariya Jutanugarn of Thailand and ShanShan Feng of China.

Among the top 15, only one player will not be participating in the event: Park Sung-hyun, who was unable to receive a sponsor exemption and was not high enough on the priority list for the event’s limited field. Park will instead start her season at the HSBC Women’s Champions in Singapore next week.

The Honda LPGA Thailand tournament was first hosted in 2006 at the Siam Country Club, Pattaya Old Course, in Chonburi, Thailand. The event starts today and turns through Sunday, and will be played at 6,642 yards. The winner of the tournament will earn 500 points toward the Race to the CME Globe, a season-long competition where LPGA Tour players accumulate points at every event.