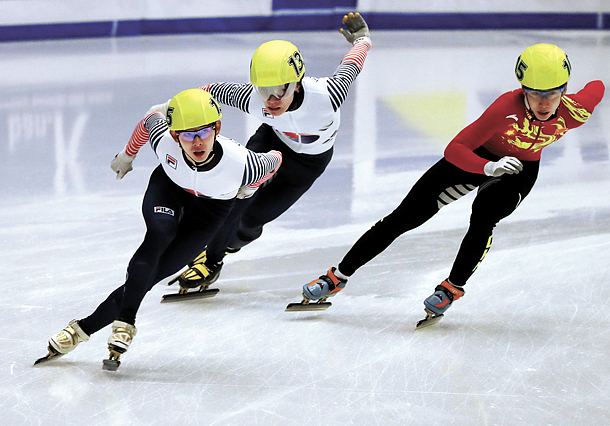 Lee Jung-su, far left, finishes first during the semifinal round in the men’s 1,500-meter short-track race at the Asian Winter Games in Sapporo, Japan, on Monday. [YONHAP]

Lee, who won two gold medals at the 2010 Vancouver Winter Olympics, helped the team to silver in the 5,000-meter relay and also won bronze in the 1,500-meter race. This was the first Asian Winter Games for the 27-year-old, but he insisted he has his eyes on bigger prizes than a regional title.

“This was my first Asian Games, but I am only concerned about the world championships next month and the PyeongChang Winter Olympics next year,” Lee said. “And my goal at this competition was not to get injured.”

As the oldest male skater here, Lee was named the team captain, and he embraced the role wholeheartedly.

“My biggest responsibility as captain is to take care of the younger guys,” he said. “Our focus here was on winning the relay, but we had to settle for silver [behind China]. I thought we could beat China.”

In other races, Lee did plenty for his teammates, too. In the 1,500-meter event on Monday, Lee was the heavy favorite as the world No. 2 this season, but he played the role of decoy in the final, drawing Chinese skaters to himself and creating space for teammate Park Se-yeong, who went on to win gold. Lee came in fourth place but moved up to bronze when one of those Chinese contestants, Han Tianyu, was disqualified.

In the 1,000-meter on Wednesday, three Koreans - Lee, Seo Yi-ra and Sin Da-woon - made the final, alongside Keita Watanabe of Japan. The Koreans moved out in front early, and Lee stayed back to let Seo and Sin duke it out for gold. Seo ended up winning that battle, and Lee finished third.

Under the competition medal policy, however, Lee wasn’t eligible to take the bronze medal because no single country is allowed to sweep a podium. Watanabe was awarded the bronze instead.

Still, Lee is walking way a content man, knowing he’d done the best he could for his teammates.

Lee was the second-youngest member of the 2010 Olympic team that produced two gold and three silver medals. If he stays on the national team for next year’s Olympics, Lee will likely be the oldest male short-track skater for Korea.

After going through a rough patch in his post-Vancouver days - he failed to make the cut in long-track for the 2014 Sochi Winter Olympics - Lee is enjoying a career renaissance of sorts.

Despite heightened expectations for a strong showing at PyeongChang, Lee said the burden will come from another source. “I don’t feel the pressure of winning a medal,” he said. “But as one of the older guys now, I’ll have to work extra hard.”