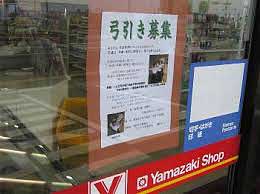 “We will catch you at all costs. You are still allowed to return or buy it.” The ultimatum was posted on the homepage of an optical store in Taito-ku of Tokyo on Feb. 4, 2017. A photo of a man, whose face was blurred, was also posted.

He was a shoplifting suspect, also known as a manbiki in Japan. Seven expensive pairs of glasses, worth 210,000 yen ($1,870) in total, had disappeared. Video of the suspect had been captured by the security camera.

“The most expensive pair was stolen. I reported it to the police, but there was no action,” the 59-year-old store owner said. “Unless the goods are returned or money is sent by March 1, I have to circulate the photo without the blur on social media.”

A large convenience store in Chuou-ku of Chiba also posted a photo of a man, titled “manbiki suspect,” on its window over the past two weeks. The man in the photo was easily identifiable. He was accused of taking several goods to a corner, where the store keeper could not see, putting one thing back on the shelf and stealing the rest. “The people won’t steal if they think their photos can be put up,” the store manager said. The store has posted photos of theft suspects since last year, and shoplifting has actually decreased.

Small retail stores in Japan are struggling because of manbiki. According to police, 113,000 cases — or an average of 300 cases a day — were reported last year. An owner of a convenience store said he earns an average of 600,000 yen in monthly sales, excluding electricity and the salaries of his workers, but about 20 percent of his profit disappears after accounting for theft.

But making the photos of suspects public to catch them and prevent similar crimes has created controversy. While some support the idea, others say it is an infringement of human rights. The ultimatum that the suspect’s face will be revealed unless the goods are returned is seen by some as blackmail. “Making public the face of a suspect without [hiding their identity] can be defamation, unless there is public benefit involved,” said Hisashi Sonoda, a law professor at Konan University.

In November 2015, a third grader at a middle school in Hiroshima committed suicide, after his teacher refused to write a recommendation for his admission to a private school. The teacher turned the request down because the student had a history of manbiki when he was a first grade student at the middle school. His plea of innocence was not accepted. It was revealed only after the student killed himself that his first grade teacher had mistakenly recorded the manbiki incident of another student on his record. Making a photo public can also create an irreversible outcome if it creates an innocent victim.

An expert in criminal litigation law said making public a wrongful suspect is a serious infringement of human rights and it is an action that requires damage compensation. “Even if the suspect truly is the shoplifter, there is no way to retrieve the photo once it spreads on cyberspace,” he said. “Reporting it to police and finding other preventive measures are best,” he added, because a wrongful conviction can produce an innocent victim.