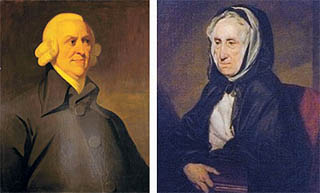 A few days ago, I purchased “Who Cooked Adam Smith’s Dinner?” by Swedish journalist Katrine Marcal. After reading a review of the book, I was drawn to the subject.

Adam Smith, father of modern economics, discussed the economic structure of market transactions inspired by self-motivated economic actors as “It is not from the benevolence of the butcher, the brewer or the baker that we expect our dinner, but from their regard to their own interest.”

But Marcal pointed out that he did not mention the labor of his mother, who had fixed meals for her unmarried son. She says conventional economics hasn’t reflected the economic values of domestic and care work.

In fact, when I was studying economics in college, my professor joked, “The easiest way to boost GDP at once is to have all housewives go to the neighbor’s house, do the same household work and childcare that they do at home and get paid.”

Students laughed and thought about the limits of GDP calculation, but I did not think much about the reality of not recognizing the value of women’s household and care work and problems associated with it.

This is the very reason why Korea’s policies to boost the birthrate constantly fail. When house and care work are packaged as “labor of love,” the actual importance and value in the economic system is vaguely calculated and underestimated.

One of the consequent problems is the low wages for the same labor when provided out of home. For example, fellow reporters who send their children to day care are worried that the pay level for the day care workers is so low that they may not be able to receive quality child care service.

Yet, the government is presenting absurd ideas to boost the birthrate. The latest controversy was a report by the Korea Institute for Health and Social Affairs that claimed that the low marriage rate is a more serious problem than the low birthrate of the married couples. To increase the marriage rate, therefore, the report argued that Koreans should be discouraged from “unnecessary investment in education,”

which eventually leads to late entry into the marriage market. At the same time, the report argues, highly educated, high-income-earning women should be encouraged to marry men who fall short of their expectations.

Now I seriously wonder if the government hasn’t ever thought that our young people are increasingly reluctant to get married because the total cost of marriage — including child care and education — exceeds its future utility.


*The author is the cultural news editor of the Korea JoongAng Daily.