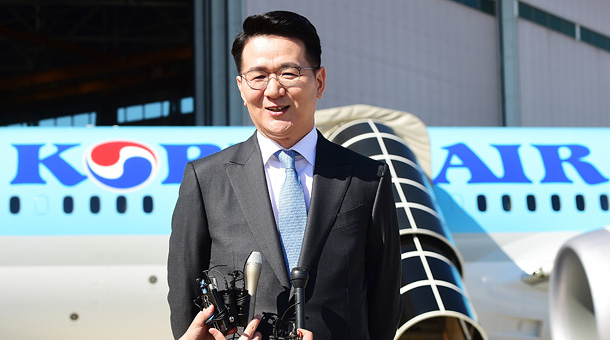 Cho Won-tae, president of Korean Air, answers questions at a press briefing Monday to commemorate the delivery of the Boeing 787-9 Dreamliner air jet the carrier acquired. The air jet is currently stationed in Korean Air’s hangar near Incheon International Aiport, gearing up to begin service on local routes in March. [YONHAP]

The first unit among 15 new commercial jets planned for purchase this year, the Boeing 787-9 Dreamliner, was showcased to the press Monday at the airline’s hangar by the Incheon International Airport.

“The new plane is called the Dreamliner because of its high-efficiency and environmental performance,” Cho said. “By adding the plane to our long-haul services with high-growth potential, we expect our presence in the global market to be expanded.”

Korean Air is the first national airline to add the Boeing 787-9 to its lineup. 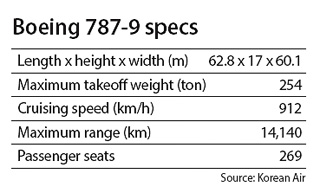 The new plane has 20 percent enhanced fuel-efficiency and 20 percent less carbon dioxide emissions than its competing air jets thanks to expanded use of carbon composite material on the aircraft’s body.

Its wing design also contributed to better efficiency. “The raked wing tip installed at the end of the plane’s wings greatly enhanced aerodynamics performance of the plane,” said Ma Won, senior vice president at Korean Air. “It contributed to improving fuel efficiency by about 5 percent.”

The raked wing tip is one of six aerostructures Korean Air has been supplying to Boeing through its aerospace business division.

Apart from the plane being more economical than competing models, it also offers an enhanced flight experience for passengers.

While high pressure in the cabin leads to less air and heavy fatigue for passengers, the Dreamliner keeps pressure at the 6,000 feet level, which means the passengers feel less pressured than in competing models where it is usually kept at 8,000 feet, the air carrier said.

“If passengers in existing aircraft felt the same pressure as when they were at the top of Mount Baekdu [2,400 meters high], they will feel as if they are standing on top of Mount Jiri [1,800 meters high] in the Dreamliner,” Ma added.

Also, the humidity in the cabin is improved to as high as 16 percent from 11 percent in previous carriers, thanks to the wide use of carbon composite materials. The material is less apt to corrosion by water, which made high water levels in the cabin possible, the carrier said.

Windows in the cabin are 78 percent larger compared to competing aircraft such as the Airbus 330.

The overall lighting inside the plane is also enhanced. The latest light-emitting diodes are installed so that in-flight lighting depends on specific phases of the trip such as eating meals, sunrise, sleeping and landing. The plane has 14 lighting scenarios.

The new plane will be added to long-haul routes, which are expanding as demand for leisure travel spikes.

“We will first put the new plane to in a domestic route headed for Jeju from March 12 then move it to a longer-haul route headed to Toronto from June,” Cho said. A newly acquired plane must go through a testing process before it’s tapped for long-haul routes, the airline explained.

“Later when all five Dreamliner planes are delivered this year, they will be placed in routes such as Madrid, Spain and Los Angeles,” Cho added.

Boeing declined to disclose the price of the plane but said it hopes the Dreamliner’s value could boost Korean Air’s presence in the global market.