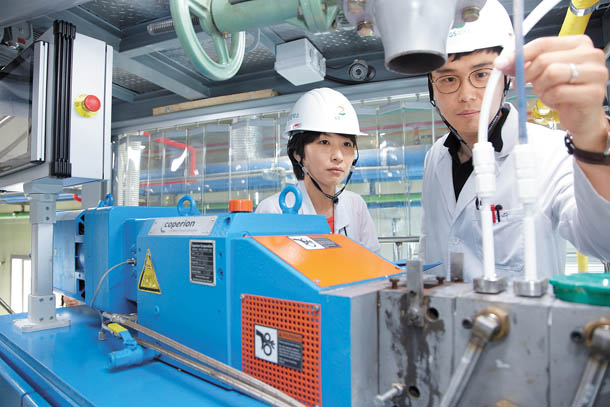 “Recently, AI and self-driving cars have signaled the beginning of the 4th industrial revolution. The revolution has demolished the boundaries between different industries, causing crisis for everyone,” said Huh Chang-soo, the president of GS Caltex, “Our company needs to consider these changes and prepare for the future.”

To illustrate his point, he told the story of Dick Fosbury, who introduced a new way to jump for the high jump at the 1968 Olympics. “It has been proven that the Fosbury-backflop is better than the scissors jump, which is how people jumped back in those days, and now every athlete follows Fosbury’s way. However, in the 1960s no one had ever imagined jumping that way. He foresaw that safer mats would be made in the future, so he came up with a new way to jump higher after much trial and error.”

He asserted that “this story shows that we can find a way to succeed even when the circumstances are unpredictable. I hope GS Caltex will take the opportunity and rise as the world’s best company.”

Accordingly, GS has strengthened its energy, distribution and construction businesses. Also, it has merged with other businesses and reorganized the company’s structure to expedite growth. The company plans to develop a new food source, improve its business portfolio and establish a stable profit.

GS has been excelling in the biochemical and composite material industries, thanks to its experiences and business know-how. It is looking into the possibility of commercializing biomass, developing production technologies and expanding demand for the products and technologies. In particular, it has invested 50 billion won ($44 million) to build a bio-butanol factory in Yeosu, South Jeolla expected to be completed by the second half of 2017.

Moreover, the company is developing commercialized technology for producing composite materials. In early 2016, it opened a branch in Mexico, the first in the industry. This will be the first step towards the North America market.

GS Energy has been expanding by merging with other companies and has thus established a strong local base for the energy business. In January, Boryeong LNG Terminal began its operation and now is able to supply 3 million tons of LNG annually. The corporation will establish a chain of LNG business in the future.

GS Retail and GS Homeshopping are also actively reorganizing their business structures. GS Retail is participating in K Bank, the internet-only bank. It has also acquired Parnas, which owns the Intercontinental Hotel. On the other hand, GS Homeshopping is focused on improving internal matters. While TV use is declining and the economic downturn is continuing, the company has quickly moved onto digital and mobile platforms.

GS EPS, the privately-owned power generation company, built an additional biomass power plant in September 2015. The biomass power plant uses the peel from palm fruit to produce electricity and is highly eco-friendly. The company expects to sell their renewable energy to the global energy market as well.