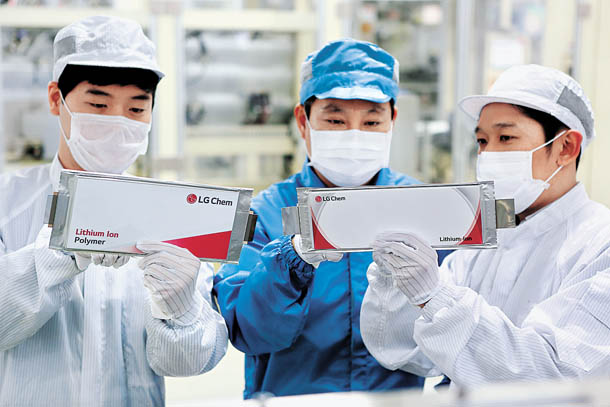 LG Chem strives to perform at its best and lead the market in the basic materials, batteries, IT and biotechnology industries. In particular, it will improve its business model, strengthen R&D and be a pioneer in bio-industry. Its ultimate goal is to become one of the top five chemical corporations in the world by 2025.

The company plans to increase its production of elastomer, which has characteristics of rubber and plastics, from 90,000 tons to 290,000 by 2018, and in doing so become one of the world’s top three producers. It has acquired the necessary technology and production line, demonstrating its superb product competitiveness.

The company is trying to maximize profit by building more production facilities for acrylonitrile butadiene styrene (ABS). The new ABS factory in Guangdong Province, China, will increase the global market share from 21 percent to 26 percent, firmly establishing LG’s position as the No.1 producer in the world. Also, it will expand the production of EP for cars from 30 percent to 50 percent by 2020.

LG will bolster its SAP business and become one of the top four producers globally by 2020. One gram (0.03 ounces) of SAP can absorb up to 500g of water, which makes it a perfect material to make diapers. For SSBR, the company will increase the ratio of eco-friendly tires from 10 percent to 40 percent by 2020. Furthermore, it will develop new materials such as CNT and Aerogel.

IT&E Materials R&D Center will raise profit from the existing business categories, such as polarizing plates and 3-D FPR. On the other hand, it will enter new businesses like wastewater engineering and functional films. Also, LG has been managing an aggressive business strategy for polarizing plates. Its annual growth rate reached more than 30 percent, and new factories were built in China.

Last June, the center signed a large scale supply contract in Oman for wastewater processing. It built a second line of factories in Cheongju, North Chungcheong, and has entered the water filter market.

Advanced Materials R&D Center will promote its existing display and energy materials, such as OLED and battery materials. It will also focus on establishing its original technologies to lead the future market.

Life Sciences R&D Center will target its core business including drugs for metabolic diseases, biopharmaceuticals and vaccines. Specifically, the center will promote Zemiglo, the first diabetic drug developed in Korea. It will also become the leading distributor of diabetes, hypertension and hyperlipemia drugs, both in domestic and international markets.