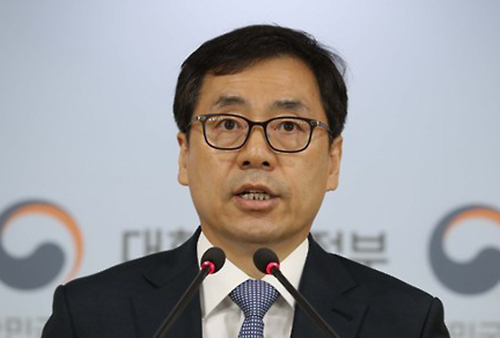 Hong Kwon-heui, the chief press secretary of Acting President and Prime Minister Hwang Kyo-ahn, speaks during a press conference at the central government complex in Seoul on Monday. [YONHAP]

The decision, which came a day before the investigators' 70-day mandate expires, riled liberal opposition parties and anti-Park protesters but appeased conservatives that have called the probe politically biased.

Hong Kwon-heui, Hwang's chief press secretary, said that Hwang made the "very difficult" decision in consideration of political circles' worries that the probe could influence the presidential election this year.

Should the scandal have to be further investigated, state prosecutors can take up where the independent counsel team left off or the National Assembly can enact yet another special probe, Hong added.

"Although it was a very difficult decision for the acting president to make, (he) has reached a conclusion that it would be desirable for the state prosecution to continue a probe (into the scandal) ... in light of our efforts to stabilize state affairs, rather than

Hwang has been agonizing over the extension issue for weeks amid strong opposition from the ruling Liberty Korea Party that believes an extension of the inquiry involving the conservative leader would only boost liberal parties' presidential prospects.

The acting president has been bandied about as a potential presidential candidate on the ruling party's ticket. He has remained noncommittal, saying he would, for now, focus on stabilizing state affairs hamstrung by Park's impeachment in December over the scandal.

The probe team, led by Independent Counsel Park Young-soo, had demanded it needed more time to get to the bottom of the case. It has yet to question the president, a central figure in the probe.

Had Hwang given the green light for an extension, the team would have gotten one additional month to investigate the case.

Park has been suspected of allowing her friend Choi Soon-sil to meddle in important state affairs and extort money and favors from large conglomerates, including Samsung Group. She is also accused of failing to carry out her due presidential duties during a ferry disaster in 2014 that killed more than 300 passengers.

Park and Choi have flatly denied all accusations against them.