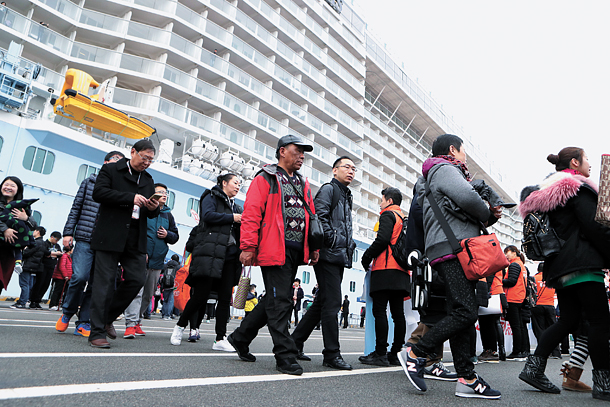 A group of nearly 4,000 Chinese tourists arrives on a 168,000-ton luxury cruise ship in Busan Sunday after Beijing ordered travel agencies to stop selling tour packages to Korea in its latest retaliation for the planned deployment of a U.S.-led antimissile system. [YONHAP]

It was only a year ago that a Chinese company sent a big group of its employees to enjoy a chimaek (fried chicken and beer) party in Incheon on a so-called incentive trip. Two months later, an even larger group flew in from China to eat samgyetang (Korean chicken ginseng soup) on the Han River.

Say goodbye to all that: China is punishing Korea for its acceptance of a U.S. missile shield and telling its people to take their holidays and business trips elsewhere.

Chinese companies that were planning to send thousands of employees on incentive trips to Korea are either delaying or canceling plans following Beijing’s ban on local travel agencies sending tourists to Korea.

According to the Incheon Tourism Organization Friday, Chinese cosmetics retailer Kouchen Group, which had planned an incentive trip to Korea in April for about 4,000 employees, sent an abrupt cancellation notice to the tourism agency on that day. Members of the company’s management had visited Korea in advance to book meeting rooms and hotels. The cancellation came suddenly.

Chinese medical equipment making company Youde Group was also planning an incentive trip to Korea for 12,000 staff this month. That trip has been delayed to April and may be called off altogether.

Aolan International Beauty Group, known for the fried chicken and beer party it held in Incheon last year for 6,000 of its staffers, promised to send more incentive trips to the city through 2018. But no arrangements have been made.

While the cancellation of such trips means losses across the industry, the sting of the backlash is being felt most acutely by Lotte Group, the nation’s fifth-largest conglomerate. It recently signed a contract to transfer a golf course in Seongju County, North Gyeongsang, to the Korean government, which will be used as the home of the Terminal High Altitude Area Defense (Thaad) system that Beijing objects to so vociferously.

In the latest retaliation against Lotte, the Korean retailer was forced to shut down two Lotte Mart branches in Dandong, China. On Saturday, fire department authorities visited the branches for unexpected fire inspections and found alleged violations.

“Until we regain approval from the authorities by fixing errors that were pointed out, operations will be halted indefinitely,” a spokesperson from Lotte Mart said.

A day before those suspensions, there was a surprise demonstration by about 10 Chinese protesters in front of a Lotte Department Store in Shenyang in northeast China. The protesters held up a placard that read “Lotte, leave China.”

A number of local Chinese partners have started breaking contracts with the retailer and Chinese online shopping malls such as JD.com are also removing Lotte products from their sites.

As the retaliation grows, Korea’s Trade Ministry said it could take legal action against China for actions that go against international trade standards.

“The Korean government is keeping a close watch on recent retaliatory actions by China and will act on behalf of Korean companies so they are not discriminated against or unfairly disadvantaged in trade,” said Minister of Trade, Industry and Energy Joo Hyung-hwan, in a statement on Sunday. “Should [Chinese authorities] take measures that violate terms of the World Trade Organization or the Seoul-Beijing free trade agreement, we will respond according to international laws.”