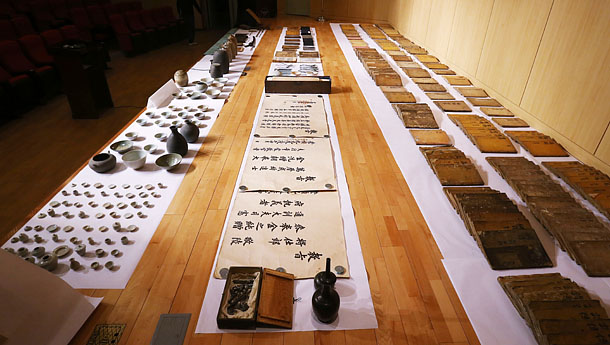 This file photo from November 2015 show about 800 cultural properties confiscated from treasure thieves by police. Since 2015, Korean police have beefed up investigations into theft of cultural heritage items, which is rampant due to loopholes in current laws. [YONHAP]

People often have a glamorized fantasy about treasure hunters, like the ones seen in popular movies and novels.

But in fact, the robbery of ancient treasures or tombs is indeed a crime.

Theft of cultural heritage items is prevalent in Korea, and while police are cracking down on perpetrators, critics say it’s more urgent to address the apparent loopholes in relevant regulations.

The detectives at Korea’s Gyeonggi Bukbu Provincial Police Agency were tipped-off in August of last year that a copy of the first-edition Donguibogam is kept at a renowned Buddhist temple in North Gyeongsang and is in fact stolen property.

Through further investigation, they were able to retrieve the ancient books in September.

The copy the police retrieved is not yet designated as a National Treasure but is worthy enough to be one as experts confirmed it to be a first edition printed in 1613. It is believed to worth billions of won.

Donguibogam was one of 4,542 cultural heritage items that Korean police retrieved from its four-month special investigation that began in July.

The police arrested 48 people who were involved in the robbery of cultural properties.

One of them was a 60-year-old Buddhist monk-turned-antique dealer surnamed Lee.

It turned out that Lee bought the first-edition copy of Donguibogam from a treasure thief surnamed Kim in 1999 and sold it to the temple two years later for 20 million won ($17,286).

Police said Kim stole many cultural heritage items in Gyeongju, North Gyeongsang, about 20 years ago. At that time in Gyeongju - which served as the capital of the Silla Dynasty (57 B.C.-A.D. 935) for almost 1,000 years and is considered a treasure trove - a large-scale city development was underway and ancient houses were being demolished.

According to police, the 57-year-old went to the houses with lax security with burlap sacks and stole many artifacts. Without even assessing the value of each artifact, Kim just sold one sack of artifacts for 100,000 won. In one of the bags was Donguibogam.

Most recently, the Cultural Heritage Administration on Feb. 21 confirmed through its website that five of cultural heritage items designated as Treasures have been stolen.

“Inspection of the current state of state-designated treasures takes place regularly by departments in charge,” she told Korea JoongAng Daily, adding that due to the sensitivity of the issue, they don’t always immediately announce to public that a treasure has been stolen.

What’s also startling is how oftentimes private museums are found to have been involved in treasure theft.

For instance, one of the 48 people arrested is Kim, a 67-year-old director of a private museum in the North Gyeongsang region.

In 2012, he bought Daemyeongnyul, a law book of China’s Ming Dynasty (1368?1644), from a treasure thief surnamed Lee. In fact, Kim displayed the book, which became the basis of Joseon’s legal system, for three years at his museum. He also had it recognized by the Korean government as Treasure No. 1906 in July last year, saying that it is a family treasure that he inherited.

Recently, a group of treasure-worthy Buddhist relics were found in the storage facility of a private museum.

Police say that as of March last year, some 28,183 cultural properties have been reported stolen. Only 17.3 percent of those have been retrieved.

However, critics say it’s more urgent that the loopholes in the current laws be revised.

For starters, the statute of limitation for theft of cultural properties is 10 years, and often if the thieves just sit on treasures for that period, they can make big money out of it.

That is why out of the 18 people that Gyeonggi Bukbu Provincial Police Agency arrested in its two-year-long investigation, four people were not indicted.

An illegal dealer told KBS last month that “most of the items on the Korean antiques market are stolen artifacts,” adding that “they keep the artifacts until the statute of limitations is over and then release them to the market.”

He added that they also damage the artifacts slightly to erase any trace of who owned it.

Another loophole that can be taken advantage of is known as the secretion of stolen goods, which can only be applied in a limited way, experts say, like when treasures are “buried underground” or “kept underwater” according to legal precedence.

Ironically, though, these loopholes in current laws are what helped police recover thousands of treasures.

They persuaded two antique thieves in their 70s, to secure intel that proved to be crucial in their investigation. “We told them we can’t indict them because the statute of limitations had passed, and asked them to help us so that we can at least retrieve the artifacts,” an officer with Gyeonggi Bukbu Provincial Police Agency told journalists.