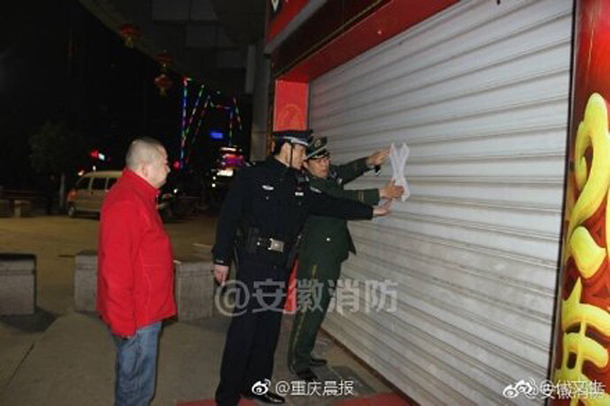 A photo of Chinese officials posting a notice prohibiting entry to a Lotte Mart because of fire safety violations was uploaded on Weibo, a Chinese social networking platform, on Monday. [YONHAP]

Four Lotte Marts were shut down for alleged violations of fire regulations by Sunday. By 2 p.m. Monday, that figure more than tripled to 15. By 4 p.m., the number climbed to 23.

The backlash has hit Lotte Group particularly strongly because it swapped a golf course in Seongju, North Gyeongsang, for a piece of government land. The golf course will become the home of the Terminal High Altitude Area Defense (Thaad) anti-missile system that Beijing so strenuously opposes.

Considering there are 99 Lotte Marts operating in China, about a quarter of have now been shut down. Closed shops were reported to have violated fire services act. From last week, China’s fire department authorities have been making abrupt fire inspections of Lotte Marts.

“We are currently fixing errors cited by the Chinese authorities and when we can resume operations will depend on their approval,” a spokesperson from Lotte Mart said. He added that more shops are expected to be affected by this sudden wave of inspections.

The closed stores include 13 under Lotte’s Shanghai Huadong corporation and two in Liaoning Province, which are run by its northeastern corporation. Other Lotte affiliates are facing vitriol from alleged customers online and demands that the company leave China altogether.

A video of protesters crushing boxes filled with beverages from Lotte affiliates with heavy equipment in a park in Henan Province, central China was posted on Weibo Monday. The protesters held up red placards reading “Lotte, leave China.”

Another uploaded photo included picture of protesters dumping carbonated water products from Lotte Chilsung Beverage. Lotte is reaching out to the Korean government for help.

Executives of Lotte led by Hwang Gak-gyu, the head of Lotte’s strategy planning division, held an emergency meeting on Sunday. Following the meeting, the retail giant asked for governmental support.

Some experts advised Korea to reduce its economic dependence on China and diversify its trading markets.

“Korea has been too dependent on China, which is why Korean businesses are so strongly hit by recent political issues,” said Kwak Joo-young, a business professor at Yonsei University. “It is time to look at relatively neglected markets such as Southeast Asia.”