Fired from the Tongchang-ri long-range missile launch site in North Pyongan Province at 7:36 a.m., the four projectiles reached an altitude of about 260 kilometers (162 miles) and flew 1,000 kilometers before splashing into the East Sea, said the JCS.

At least three missiles were suspected to have fallen into waters of Japan’s exclusive economic zone. Some of the missiles landed in waters as close as 300 kilometers to Japan’s northwest coast off the Oga Peninsula in Akita Prefecture, Japan’s Defense Minister Tomomi Inada said, according to the Japan Times.

The JCS said South Korea’s military were working with their American counterparts for further analysis on what type of missiles they were. 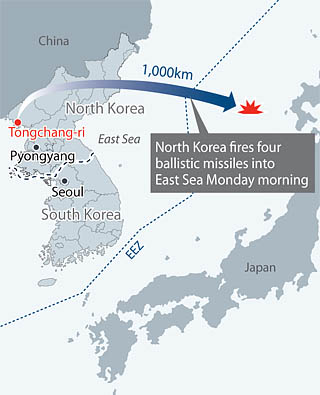 Roh Jae-chun, PR chief of the JCS, said during a regular briefing that chances were “low” any of them were an intercontinental ballistic missile (ICBM), as Pyongyang has threatened to fire.

Pyongyang’s latest missile launch came days after the state-run Rodong Sinmun newspaper threatened to counter ongoing military drills between Seoul and Washington with the “toughest counteractions” possible, adding that the statement was not empty talk.

North Korea sees the annual drills as a rehearsal for an invasion and has often responded with military provocations. During last year’s drills, it fired six short-range missiles.

On Feb. 7, 2016, the North launched a long-range missile from the same Tongchang-ri site and claimed it successfully put a satellite into orbit around the earth, which world powers saw as a cover for the test of an ICBM.

The latest launches also came during China’s National People’s Congress in Beijing and as the Donald Trump administration starts to formulate a policy on North Korea.

In its first missile launch this year, just 22 days ago, the North fired an intermediate range ballistic missile from Banghyon Air Base in North Pyongan Province on Feb. 12, which flew 500 kilometers before splashing into the East Sea.

South Korea’s chief of the National Intelligence Service (NIS) later told lawmakers on the National Defense Committee that the missile, named Pukguksong-2, had the capacity to fly 2,000 kilometers or more, which wasn’t the longest Pyongyang had launched by then but was technologically advanced enough to “unnerve” Washington.

A range of 2,000 kilometers encompasses all of South Korea and Japan, including American military bases in Okinawa. The distance between North Korea and the mainland United States is about 10,000 kilometers, which military authorities in both Seoul and Washington do not believe Pyongyang is capable of achieving yet.

The NIS chief at that time highlighted Pyongyang’s improved “missile load capacity” and use of a solid-fuel engine, which enables the regime to be more operationally robust and launch a missile on very short notice.

In a statement issued Monday by the Ministry of Foreign Affairs, Seoul said it “strongly condemned” the missile launch and that North Korea “must realize its maniacal obsession with the repetitive provocations and development of nuclear and ballistic missiles will only accelerate its self-isolation and destruction.”

The South also mentioned the recent assassination of Kim Jong-nam, the estranged half brother of North Korean leader Kim Jong-un, saying that the timing of the missile launch proved how “reckless” the communist regime was toward “unified warnings” from the international community.

South Korean authorities believe the killing of Kim Jong-nam on Feb. 13 at a busy airport in the Malaysian capital of Kuala Lumpur was an act of terror ordered by his half brother.

The fact that the suspects used an internationally banned VX nerve agent for the murder, according to Malaysian police, provided fresh fodder for the South Korean government to drum up worldwide condemnation.

Hwang Kyo-ahn, South Korea’s prime minister and acting president, convened a National Security Council meeting on Monday morning and urged a “speedy” deployment of the U.S.-led Terminal High Altitude Area Defense (Thaad) anti-missile system. He said the South should also search for other ways with the U.S. to enhance its deterrence capabilities against the North.

Hwang did not specify what those other ways could be.

Mark Toner, acting spokesman for the U.S. State Department, said Washington “strongly condemns” the North’s missile launch, according to ABC News, and that it was a violation of UN Security Council resolutions which prohibit the use of ballistic missile technology.

“Our commitment to the defense of our allies, including the Republic of Korea and Japan, in the face of these threats, remains ironclad,” said Toner. “We remain prepared - and will continue to take steps to increase our readiness - to defend ourselves and our allies from attack, and are prepared to use the full range of capabilities at our disposal against the growing threat.”

The U.S. Strategic Command systems detected and tracked what it assessed as a North Korean missile, Toner said, but the North American Aerospace Defense Command determined that it did not pose a threat to North America. The Japan Times quoted Japanese Prime Minister Shinzo Abe as saying, “Repeated launches by North Korea are a serious, provocative action in terms of security and clearly violate UN Security Council resolutions,” adding Tokyo can “never tolerate this.”

China, North Korea’s greatest ally, has yet to make any remarks.

The North’s launch of a missile came on the sixth day since the South kicked off a joint military drill with the U.S. last Wednesday. The annual Foal Eagle, a field training exercise involving ground, air, naval and special operations, which both countries stress is purely defensive, demonstrates the allies’ military resolve to deter a possible war on the Korean Peninsula.

Pyongyang, however, sees it as a rehearsal for an invasion.

Foal Eagle will run through late April. Key Resolve, a separate command post exercise, will be held for two weeks starting next Monday.

South Korea’s military said around 290,000 domestic soldiers and 10,000 U.S. soldiers will participate in the drills, which by scale would be approximately the same as last year, the largest to date.