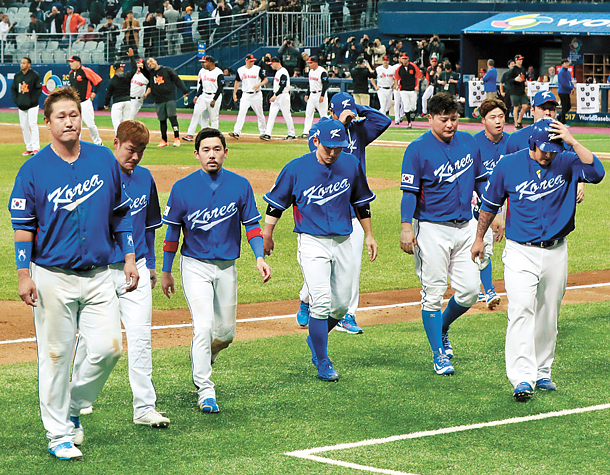 The Korean team lost its second World Baseball Classic game against the Netherlands 5-0 on Tuesday. In order for Korea to get a chance at advancing to the second round, both the Netherlands and Chinese Taipei will have to lose their remaining games. [YONHAP]

Team Korea has had a poor showing at the World Baseball Classic this year.

After losing both its round-one games so far, the team will have to win its final game in Pool A against Chinese Taipei if it wants any hope of advancing to the second round.

But that also hinges on whether Chinese Taipei can win against the Netherlands. As of Wednesday press time, that game was still ongoing.

The chances for Korea are slim. Israel, considered the underdog in the pool, is already a favorite to advance to the second round after beating Korea 2-1 on Monday and toppling Chinese Taipei 15-7 the following night. 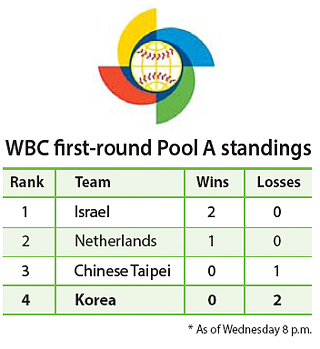 That leaves one more spot for Korea, Chinese Taipei and the Netherlands to fight over. If both the Netherlands and Chinese Taipei finish their Pool A games with one win and two losses, the Korean team has a shred of hope. They can try to beat Chinese Taipei today and force the round into a tiebreaker. However, only two teams will be able to vie for the spot, and that will be determined based on head-to-head records, runs scored, innings team batted, runs against and innings pitched.

Korea started the World Baseball Classic with high hopes. Its first game, against Israel, was supposed to be a breeze. The team put in eight pitchers and several power hitters, but they failed to meet expectations. Kim Tae-kyun, the third hitter, and Lee Dae-ho, fourth on the roster, went a combined 0-for-8 with four strikeouts. It was Seo Geon-chang, the team’s second hitter, that ended Israel’s lead during the fifth inning when he scored Korea’s only run in the game.

Oh Seung-hwan, the team’s closer, managed to throw a scoreless inning, only allowing one hit. The game ended after an extra inning where Lim Chang-yong allowed a single run to shortstop Scott Burcham. The Korean baseball team only made seven hits throughout the game.

Despite the poor performance, Kim In-sik, the Korean team’s manager, said he would not make any major changes to the starting lineup in its following game against the Netherlands. “I’ll trust the players,” he told the press after the game.

But alas, it was not meant to be. Instead, they were wiped out by the Dutch 5-0.

Considering the Netherlands’ power hitters - five out of the six are big-leaguers - Kim chose a submarine pitcher, Woo Kyu-min of the Samsung Lions as the starter. Submarine pitchers, also known as underhand pitchers, are very rare in European and American leagues. In past international events, the Korean baseball team has benefited from submarine pitchers because many other countries are unfamiliar with underhanded pitching. A good example is Lotte Giants pitcher Chong Tae-hyon, who played a key role on the team from the 2000 Sydney Olympics to the 2008 Beijing Olympics, where Korea won gold in the sport.

Kim expected the same from Woo. But the Dutch hitters were well prepared, and Woo ended up giving up three runs on six hits, including one home run, in 3 2/3 innings.

In contrast, Rick Vanderhurk, the starting pitcher for the Netherlands, threw four scoreless innings and allowed three hits. His fastest ball went 153 kilometers per hour (95 miles per hour) on Tuesday.

Vanderhurk actually made his debut in the Korea Baseball Organization in 2013 playing for the Samsung Lions. In 2015, he joined the Fukuoka Softbank Hawks and recorded 16 wins in his two years in the Japanese league.

Not only were Korea’s pitchers struggling on the mound, the batters were dismal, even though many were familiar with Vanderhurk’s fastball. Korea’s batting lineup recorded a scoreless game with six hits.

“There were gaps in pitchers and hitters between the two teams,” Kim said after the game. “We might have had better results if we had major-leaguers on the team, but what’s done is done. We’ll try our best against Chinese Taipei on Thursday.”

At the 2013 World Baseball Classic, the Netherlands was considered a Cinderella team, beating powerhouse Cuba twice to advance to the semifinals. Now, the team has returned stronger than ever as a majority of players from that roster four years ago have grown up in Major League Baseball and Nippon Professional Baseball.

The Dutch team has also strengthened with San Francisco Giants hitting coach Hensley Meulens as head coach and Andruw Jones, who competed in the 2013 tournament, on the coaching staff.

On Korea’s part, the team will have to win against Chinese Taipei. That game will begin tonight at 6:30 in the Gocheok Sky Dome, western Seoul.