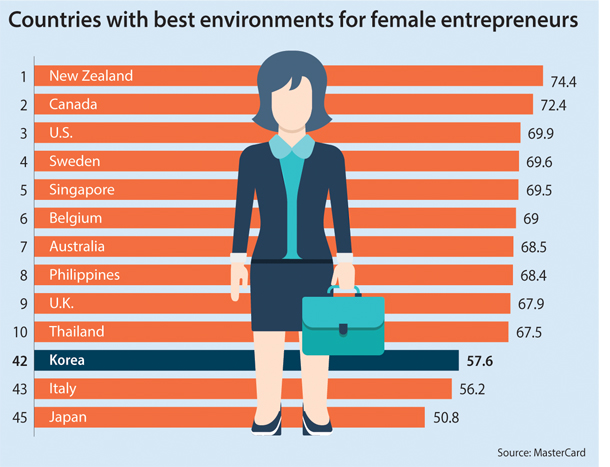 Korea lags behind China and even lower-income Uganda when it comes to female entrepreneurship, according to a study by MasterCard released on Wednesday, International Women’s Day.

Korea ranked 42 among 54 economies in business environments for women as it earned 57.6 out of the total 100 points on the MasterCard Index of Women Entrepreneurs. The index assesses bias against women in the workforce, political and business leadership, the financial strength and entrepreneurial inclination of women; the degree to which women have access to basic financial services, safety for women, support for small and medium-size businesses and the country’s entrepreneurial support.

New Zealand topped the list with a 74.4 score followed by Canada with 72.3 and the U.S. with 69.9. New Zealand also received high marks when it came to female business ownership, as it placed third in the world with a 33.3 percent rate.

MasterCard, in its research, said New Zealand’s achievement is largely the result of the advancement of women in businesses and the corporate world, financial access as well as support for entrepreneurship.

Korea, despite its high-income economy, had a lower ranking than China, which came in at 29, and Uganda, which was just higher than it. Korea was just three notches ahead of Japan, where only 12.6 percent of women have ascended to leadership or a managerial role.

When it came to women business ownership, Uganda ranked first as nearly 35 percent of its businesses were owned by women. China ranked eighth with 30.9 percent while Korea ranked 29, sharing the same spot with the Philippines with 24.4 percent.

The report said Uganda was an inspiration as the average entrepreneurs were women ages 18 to 34 who had at least a secondary education.

The Korean government has recently been trying to encourage more women to actively engage in the economy, especially since the workforce eligible to sustain the nation’s growth has been shrinking due to an aging population and low birth rates.

However, one of the biggest challenges for women is the high glass ceiling in Korea’s corporate world.

The government recently disclosed the names of 27 companies, including Kumho Tire, that have few or no female employees as well as those that have a low percentage or no women in management.