Tourism industry looks to curb dependence on China : As many cancel planned trips to Korea, businesses try to appeal to rest of Asia

Tourism industry looks to curb dependence on China : As many cancel planned trips to Korea, businesses try to appeal to rest of Asia

Individuals may have the freedom to travel from one country to another, but the situation becomes challenging when political strife creates tension between one’s home and their destination.

When the Chinese government announced that it will forbid Chinese travel agencies from providing group tours to Korea from March 15, the domestic tourism industry quickly began to take close watch. The decision came after Korea and the United States agreed to install the U.S. Terminal High Altitude Area Defense (Thaad) antimissile system in Korea last year, an action that China sees as a threat to its national security. Although individual travel is still allowed, the upcoming ban could greatly affect Korea’s appeal to Chinese travelers.

While some may see the ban as a temporary setback that will allow Korea to focus on accommodating travelers from other countries, those in tourism-dependent businesses are left scrambling. Korea heavily relies on Chinese travelers to support its tourism industry.

Korea saw a total of 17,241,823 inbound travelers last year, almost half of which came from China. Korea saw a 34.8 percent increase in the number of Chinese travelers to Korea last year compared to the year before. The number is a sharp jump from the mere 86,865 who visited in 1992, when Korea and China established official ties for trade and more.

Cancellation is the new word

The recent announcement from the Chinese government immediately affected an event the Korea Tourism Organization (KTO) had been preparing. The state-run tourism agency was scheduled to hold an information session yesterday in Shanghai with local Chinese agencies to introduce more activities they can use in their travel packages, but that event was cancelled. The tour organization initially planned to use the chance to preview cultural or sports experiences in Korea so that more Chinese agencies can develop tours that would appeal to more individual travelers than large groups.

“Basically all promotional events in China for travel agencies have stopped, because local agencies in China won’t be motivated to make any new travel packages for the time being,” said Baek Man-seong, a deputy director of the communications team at the KTO.

From Far Left: As the Chinese government forbade its travel agencies to bring Chinese tourists to Korea on tour packages beginning March 15, a duty-free store, Incheon International Airport, and even the streets of Myeongdong, have begun to empty. [YONHAP, JOONGANG ILBO]

Some luxury hotels have seen room cancellations that were reserved as part of tour packages. Although the numbers of Chinese travelers aren’t usually big, an official at a local five-star-level luxury hotel in Seoul said, the hotel might have to endure up to 1 billion won ($869,000) of damage in sales in the coming months.

“Usually up to 200 people come in at a time to stay up to three nights, which means a cancellation of 600 rooms,” the official said.

“Although we so far have only seen one group canceling its reservation, the situation will have Chinese refraining from making reservations to come to Korea from now on, and that could hurt upcoming sales in the next two or three months as [agencies] usually prepare group travel two to three months in advance.”

Chinese cosmetics maker Kouchen Group has also canceled its plan to send 4,000 of its employees to Incheon as part of an incentive tour, and other Chinese companies who brought their employees last year and planned to return this year reportedly never started discussions on possible visits.

The cancellation of trips has affected airline companies as well. Korean Air said it has seen a 10 percent increase of cancellations on flights from China to Korea between March 7 to April 30. It said there is not many cancellations of flights from Korea to China. The airline, which sees about 13 percent of its sales from the routes it operates between Korea and China, might consider other measures to minimize the damage in the coming months.

“We will continue watching the reservation status and consider cutting [the number of flights] on certain routes from China to Korea which included passengers that were part of packaged trips,” said an official at the Korean Air’s communications team. It also added that the company will try to bring in more travelers flying to China from Korea as well as individual Chinese travelers or business travelers to Korea in an attempt to cope with the challenges.

Asiana Airlines, which makes about 19 percent of its sales from its flights in and out of Chinese cities, is also discussing options so that it can act promptly if any more changes arise.

Since the announcement of China’s ban on packaged trips to Korea, the Ministry of Culture, Sports and Tourism has also made a special task force to come up with ways to help the local tourism sector so that the industry overall won’t suffer from a sudden halt of Chinese travelers and minimize the damage. The ministry is expected to release an official statement and measures to respond to the recent decision by the Chinese government before the ban goes into effect next week, but its day-to-day discussions are so far confidential. 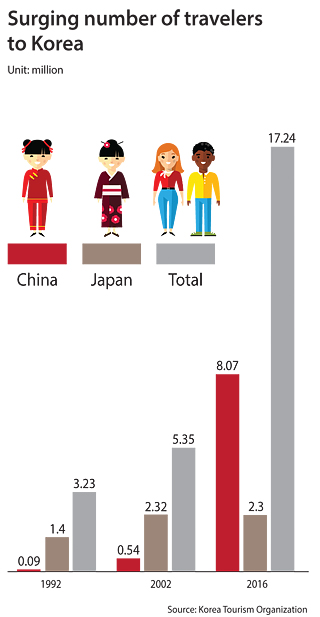 Pivoting to elsewhere in the world

The local tourism industry has now started to reckon with the fact that they need a new set of plans to remain strong even when there is a drop in the number of Chinese travelers to Korea.

The state-run tour organization has seen growing demand for group tours from other countries in Asia recently. The KTO said that Vietnam has brought in three times more tourists as part of an international companies’ incentive program last year than the year before. Thailand has shown a 71 percent increase while the number of visitors from Japan have grown by 57 percent and from Hong Kong by 56 percent.

“Incentive tourism have been receiving a spotlight with the arrival of super-sized Chinese companies who held big events like eating chicken soup by the Han River, but recently more countries elsewhere in Asia have been showing interest in that particular travel option,” said the KTO’s communications team in a release. “The radical drop of the number of Chinese tourists in the incentive tourism market was expected as the installation of Thaad was confirmed, so the organization has been fiercely marketing to [expand markets with travelers from elsewhere in Asia.]”

According to the organization, expenditure per person on an incentive tour is $2,096, while an individual traveling independently spends $1,712.50. While the Chinese companies that brought thousands of visitors at once focused more on the Seoul metropolitan area due to the lack of infrastructure in the other regions of Korea that could not accommodate thousands at once, other companies elsewhere in Asia bring fewer than 1,000 people, which makes it possible for them to go outside of the metropolitan area and experience the different charms of each region in Korea. Some groups have taken their employees to visit strawberry farms or go skiing in Gangwon.

Not just in the field of so-called incentive tourism, but individual cities have decided to come up with different plans to bring in more travelers from other Asian countries. Daegu plans to ask the national government to allow travelers from some Southeast Asian countries with high populations, such as Indonesia, the Philippines and Vietnam, to get their visas waived to enter Korea. Right now, only citizens from Malaysia, Singapore, Thailand, and Taiwan are allowed to enter Korea without a visa for 90 days. Jeju Island, whose foreign visitors are 85 percent Chinese, has also decided to devise different travel programs and promotions to bring in more tourists from other countries.

“The tourism industry has relied heavily on Chinese travelers, and now is the time to diversify,” said Kwon Tae-il, a research fellow at the Korea Culture and Tourism Institute, adding that what seems like a barrier can in the end work to make the entities in the tourism industry become sturdier as they will check to see if their own management has been done effectively.

“It is hard to say if other target markets are new as it was just China taking the majority. Businesses in the tourism sector now need to get more aggressive with their marketing strategies to expand their presence in markets that they have already entered [but previously considered less important].”

Considering sightseeing isn’t a goal for some when they travel to Korea, some stores and industries are focusing on providing experiences that travelers don’t see often in their hometown or elsewhere. One of the popular trends seen in Hong Kong, for instance, is the increasing interests in coming to Korea to take wedding photos or photos with friends. After seeing the samples online of the photos done by studios here, more foreign residents want to travel to Korea to get their photos taken to celebrate special days.

“Many seem to like the photos taken in Korea as they think their friends look like models in them and they want to get their own as well,” said Yeri Choi, a finance analyst working in Hong Kong. She also added that some Hong Kong-based photo studios advertise that their photos look like the ones taken in Korea considering the popularity of going to Korea for photos there.

Some others also come for bachelorette parties in Seoul to visit bars and spas to pamper themselves.

This trend has been pushed by collaborations between Asian countries to promote what’s best in the region. There is not only lists of the top 10 or top 50 best restaurants to visit in one city like Seoul or Tokyo, but also lists of “Asia’s 50 Best Restaurants” or “50 Best Bars in Asia.”

With more trendy spots to visit in Korea being revealed to the global community, those who live in countries nearby spread the word on the experiences they have had in the country’s cultural hotspots.

“Now almost 40 percent of guests that come to Alice Cheongdam are foreigners compared to mere 20 a couple of years ago,” said Kim Yong-joo, the owner and a bartender at Alice Cheongdam, an upscale whiskey and cocktail bar in Gangnam District, southern Seoul.

“Some of them come more often than the bar’s local regulars and spread the word to their friends in their hometown, who also come to visit.”