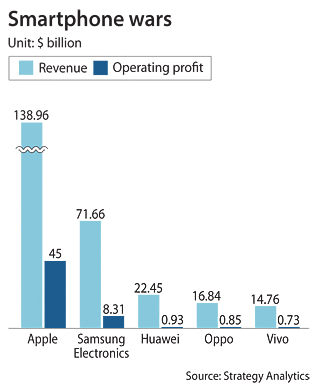 Samsung shipped 309.4 million smartphones last year and Apple sold 215.4 million, but the Korean company still lagged behind in profitability. The result translates to a 32.4 percent operating profit to sales ratio for Apple and only a third of that, 11.6 percent, for Samsung.

Industry analysts point to Apple’s narrow portfolio of high-end phones as a major contributor to such high profitability. Compared to Samsung, which owns a broad portfolio, from high-end phones like the Galaxy S and Note series to cheaper phones like the Galaxy A, C and J, Apple only produces high-end iPhones, with a larger variation, the iPhone Plus. Focusing on the iPhone has cut manufacturing costs for Apple, many analysts say. It has also trimmed R&D costs while granting high profitability.

Samsung, on the other hand, had to bear higher costs to manage a wider range of products that usually lack in profitability compared to its high-end series. On top of cost disadvantages, the fiasco last year involving the fire-prone Galaxy Note7 incurred massive losses and dragged down company profit. The Note7’s void following its discontinuation knocked down Samsung’s third-quarter profits to a mere $7 million last year.

Still, Samsung is ahead of its Chinese competitors, which are rapidly expanding their presence in the global smartphone market by banking on cheaper products.

Huawei, which recorded $929 million in profit last year, accounted for 1.6 percent of global smartphone profit, while Oppo followed with $851 million and Vivo with $732 million, each accounting for 1.5 and 1.3 percent. Xiaomi reaped in $311 million, making up 0.5 percent.

Even after combining the profit of all four leading smartphone makers based in China, they only made up about a third of Samsung’s profit.

“As Samsung also makes televisions and home appliances, a cheaper phone lineup is a strategy by the company to enhance brand recognition overall,” IT specialist Park Yong-hoo told the JoongAng Ilbo. “It will have to adjust its smartphone lineups at a point where it can maximize profitability and brand recognition.”