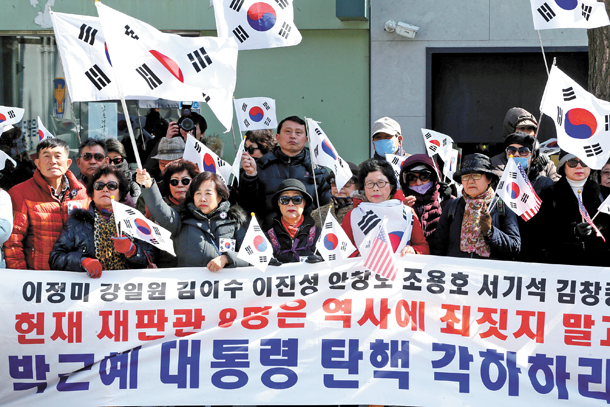 Dozens of pro-Park Geun-hye supporters wave Korean flags in front of the Constitutional Court in central Seoul on Wednesday to put pressure on justices who will decide whether to remove the president from office. [KIM SEONG-RYONG]

Tensions snowballed outside the Constitutional Court Wednesday as supporters of President Park Geun-hye rallied to pressure judges to reject the National Assembly’s impeachment of the disgraced leader.

The eight judges of the court started deliberation at 3 p.m. Since hearings in Park’s impeachment trial ended on Feb. 27, the judges held six deliberations as of Wednesday.

Police buses surrounded the Constitutional Court compound and 1,000 police officers were deployed as dozens of protesters gathered. Members of conservative groups supporting President Park said they will hold daily rallies near the court. They started the protest Wednesday morning.

Kim Pyung-woo, one of Park’s defense lawyers in the impeachment trial, joined the rally around 10:50 a.m. and showed his support for the protesters. He held a press conference to argue that it is unlawful for the court to rule on the case with a vacancy on the bench.

“The Constitutional Court must avoid self-destruction,” he said. “Even if the eight judges decide to uphold or reject the impeachment, it is invalid because the court does not have rightful judicial power.”

Kim said the court must delay its ruling until after the vacancy on the nine-member bench is filled.

Kim also said the court must resume hearings in the trial while the confirmation process takes place for the successors. A ruling, then, should be made by nine judges, which represent the separation of powers in Korea, he said.

His argument, however, has little chance, experts in the legal community said, citing precedents in which the court deliberated and ruled on cases with vacancies in the past.

Supporters of the impeached president said they will hold daily rallies near the court until Saturday. The rallies will take place from 10 a.m. till 8 p.m. at Anguk Subway Station in Jung District, central Seoul, which is near the court.

Threats were also made against the Constitutional Court judges and members of an independent counsel team that concluded an investigation into Park and her associates last week. Independent counsel Park Young-soo requested restraining orders against four supporters of Park, including Jang Gi-jeong, head of Young’s Liberty Union.

They held rallies in front of Park’s residence last month and threatened his safety. “The independent counsel must be beheaded,” Jang said at one of the rallies.

A death threat against Lee was also posted in an Internet community, and a member of President Park’s fan club later turned himself in to the police and confessed.

As threats grew, the eight judges of the Constitutional Court have been receiving protection from armed police forces since Feb. 24. Key members of the independent counsel team, including Park and his four assistant counsels, are also being protected by police carrying guns and live ammunition.