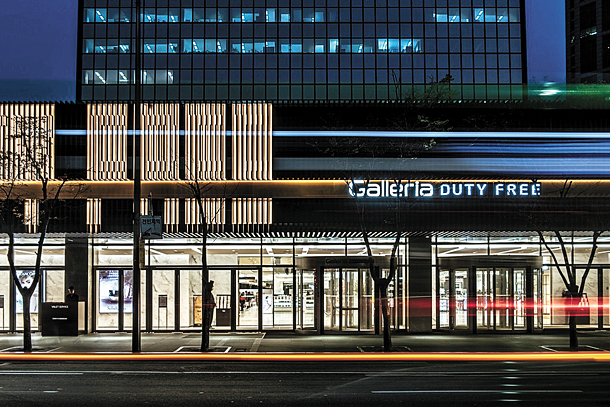 Hanwha Group’s Galleria Duty Free 63 will focus on customers from the Middle East to fill the vacancy left by Chinese tourists, whose numbers have been falling in recent weeks due to conflicts with Beijing over the deployment of an antimissile system. [GALLERIA DUTY FREE]

As China continues to squeeze Korean companies in a geopolitical spat over a controversial antimissile system, local duty-free retailers are looking for business opportunities from other regions, including Southeast Asia and the Middle East.

Chinese tourists used to account for at least 70 percent of all sales at Korean duty-free stores. This number is expected to drastically decrease after Chinese travel agencies end all group tours to Korea starting March 15, an order that came directly from Beijing ostensibly in response to the Korean government’s decision to deploy a U.S. antimissile system in South Korea which China believes threatens its security.

To brace for impact, duty-free store operators are taking steps to woo tourists from other countries.

Hanwha Group’s Galleria Duty Free 63 is focusing on the Middle East. It has already signed contracts with two Korean travel agencies that handle Middle Eastern clients and plans to participate in a Middle Eastern travel fair next month to find new partnerships. To attract more Muslim visitors to its duty-free shop in the landmark 63 Building in Yeouido, western Seoul, four high-end restaurants there have acquired a halal-friendly certificate from the Korea Tourism Organization.

Another potential market for duty-free operators is Southeast Asia, where interest in Korean pop culture has been consistently rising. Galleria Duty Free participated in a travel fair there in November to better understand the market and has signed contracts with 79 Korean travel agencies that cater to Southeast Asian tourists.

In terms of spending, the company said in a statement that Middle Eastern tourists surpass Chinese visitors by 30 percent.

“Instability in the duty-free market at the moment might be a chance for us to improve on the long term by diversifying tourists’ nationalities and strengthening efforts to pull in new VIP tourists,” said Han Sung-ho, a director at Hanwha Galleria Time World.

Rival Shinsegae DF earlier in December reinforced its hold on the Southeast Asian market by establishing ties with AirAsia Group. The low-cost carrier is the largest airline in Malaysia and has subsidiaries in Thailand and the Philippines. Under their contract, both companies are developing tour itineraries and promotions for AirAsia passengers.

“The fact that Southeast Asian tourists to Korea are increasing their pie is a positive indicator for our goal of diversifying clients’ nationality, which we had since we opened our first store in Myeong-dong in May,” said CEO Son Young-sik of Shinsegae DF.

Another local retailer, Shilla Duty Free, in January signed a partnership with Rakuten, which runs one of Japan’s most popular online travel agencies.

The industry’s top player, Lotte Duty Free, also said it had eyes on Southeast Asia and Japan. “We’re making efforts to expand our presence and open up more ties in Southeast Asia,” the company said. “The Thailand branch will open soon this year, and we already have two operating in Indonesia.”

According to the Korea Tourism Organization, the number of Asian tourists to Korea excluding Chinese was 474,791 in January, a 21 percent increase from last year.

However, this was still smaller than China’s 565,243 visitors, which is why industry sources say China’s gap will not be an easy one to fill with other countries.