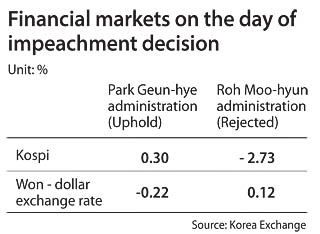 The Constitutional Court’s decision to oust President Park Geun-hye helped improve market sentiment and lift political and economic uncertainties, sending the stock market up on Friday. The won also strengthened against the greenback.

Ahead of the historic impeachment decision on Friday, the Kospi opened lower, slipping 0.05 percent. But after the court’s decision was announced, the main bourse rebounded to close at 2,097, up 0.3 percent from the previous day while the secondary Kosdaq added 1.01 percent at 612. The local currency closed at 1,157.40 won against the dollar, down 0.7 won from the previous session’s close

“The decision is perceived in the market as a factor to relieve uncertainties stemming from the leadership vacuum,” said Kim Byung-yeon, a researcher at NH Investment & Securities.

“So far, the absence of the top leadership hampered the country from moving with a clear direction on economic policies and diplomatic relations especially with China.”

But Kim cautioned that the impact would not have long-lasting market boosting effects ,since the events such as U.S. rate increases and Donald Trump’s budget plan will carry more weight on the financial market.

The economic impact of the impeachment decision draws a contrast with when the court rejected a motion to impeach former president Roh Moo-hyun. On the day of ruling on May 14, 2004, the Kospi fell 2.73 percent.

Still, other analysts see that uncertainties will linger until May when the presidential election is likely to take place.

“While the impeachment decision does clear the ground for new political leadership and should end the protracted period of widespread discontent and protests among the South Korean public about the corruption scandals under the Park presidency, South Korea’s future foreign policy under the next president towards North Korea and China will now become an unknown factor for the near-term.”

The financial authorities vowed to strengthen its monitoring on the markets to prevent potential volatility.

The government’s major financial players - the Ministry of Strategy and Finance, the Bank of Korea and the Financial Services Commission - held emergency meetings after the announcement and launched 24-hour market monitoring programs.

Deputy Prime Minister Yoo Il-ho during the meeting stressed the need of maintaining the nation’s external credibility, especially including the uncertainty and anxiety of foreign investors resulting from the Constitutional Court’s ruling.

The Korean government sent a report to the three international credit rating companies including Moody’s that stressed the systematic stability of the local economy.

Yim Jong-yong, head of the Financial Services Commission said in his meeting that the regulatory agency will implement measures aimed at stabilizing the market, if necessary.

Meanwhile, Korea’s major business groups called on the nation and its people to focus on what they call urgent economic issues in the country such as persistently low domestic consumption.