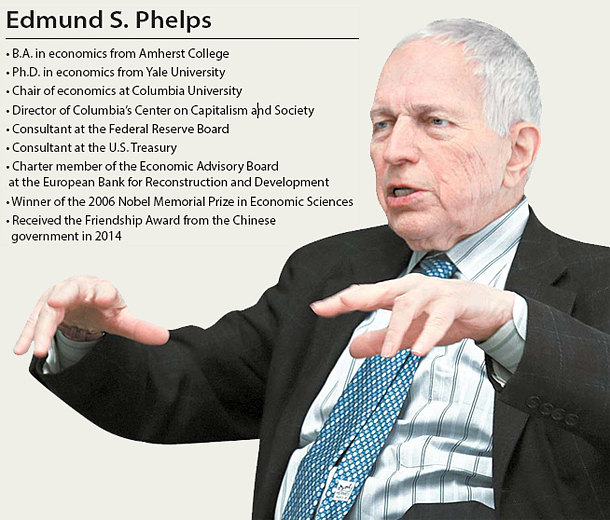 Edmund S. Phelps is a towering figure in economics and continues to be active in the field. When the JoongAng Ilbo met with him in his office on Feb. 21, the 83-year-old Columbia University professor couldn’t spare even a few minutes afterward because he had to leave for Mexico right away for a business trip.

In 2006, the Nobel Memorial Prize in economics committee recognized Phelps for his research in the 1960s that found a correlation between unemployment and inflation.

Before Phelps’ study, a theory called the Phillips curve, which claimed that unemployment and inflation moved in the opposition direction, dominated the academic scene. The curve, which was based on past cases, implied that people had to endure high inflation in order to lower the unemployment rate and vice versa.

Entering the 1970s though, the theory didn’t seem to hold anymore as stagflation, with both inflation and unemployment rising, persisted.

Finding the Phillips curve was no longer applicable, Phelps defined a “natural rate of unemployment” that existed regardless of government policy. The fact that monetary policy could not affect soaring unemployment led many countries to instead focus on price stabilization.

After receiving the Nobel Memorial Prize, Phelps served as an economic adviser to Chinese Prime Minister Li Keqiang, and for his contributions, he received the National Friendship Award from the Chinese government in 2014.

Phelps was born in Evanston, Illinois, and received his Ph.D. in economics from Yale University in 1955, studying under Nobel Memorial Prize laureates James Tobin and Thomas Schelling among others. After five years as a professor at the University of Pennsylvania, he joined the Columbia faculty in 1982.

Some of his notable books include “Rewarding Work: How to Restore Participation and Self-Support to Free Enterprise” (1997), “Structural Slumps: The Modern Equilibrium Theory of Employment, Interest and Assets” (1994), and “Inflation Policy and Unemployment Theory” (1972).