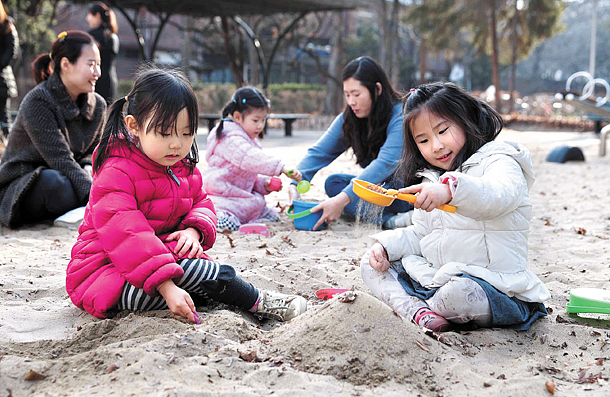 Yeom Mi-young, left, and Jin Ah-young, mothers to 6-year-olds, play with their children at a playground in Mok-dong, western Seoul, on Monday. [KIM SANG-SEON]

The 6-year-old daughter of Lee Ji-eun, a resident of Yangcheon District of western Seoul, does not know how to read or write Korean yet. And that’s perfectly fine, Lee says.

“I have seen mothers here teach their kids Korean and English from when the children are as young as 2 or 3-year-olds, but many of these kids lose interest in studying once they enter the higher grades in elementary school,” Lee said. “Rather than stressing my child out with early education, I have chosen to let her play and learn from her own experiences and travels.”

Lee’s daughter attends a kindergarten that focuses more of its time on letting the children play together. After she comes home, she spends three hours every day at a playground. Lee watches on as she plays with other kids and does not interfere when she throws dirt and sand into the air at the playground, soiling most of her clothes.

When the pair returns home, Lee fills the bathtub for her daughter, who spends another hour or so playing in the water. After dinner, she plays with stuffed animals and paints with her mother. The family goes on trips every weekend, too.

More parents like Lee are opting to delay teaching their children reading and writing in Korean and English and basic mathematics like counting until they enter elementary schools. They are a growing group here as some thousands flock to online communities on portal websites like Daum and Naver that promote more play time for kids.

One member of an online community named “Kids can grow up on their own” told the JoongAng Ilbo, “Some parents ask me how come I haven’t taught my 7-year-old son any Korean, but I think it’s more important for him to be creative with his mind as he looks at picture books, rather than knowing how to read so early on.”

Some hold community meetings together.

“We mothers who pursue this alternative type of education meet once in a while to share information,” said Jin Ah-young, a 34-year-old resident of Mokdong, Yangcheon. “A lot us found each other naturally, as our kids spend a lot of time at the playground in the apartment complex.”

“More mothers in the neighborhood are asking us to reduce education on reading and writing and basic mathematics, and to increase their kids’ playtime at the kindergarten,” said a head of a kindergarten in Yangcheon.

Experts say these parents are likely following examples in Finland, Germany and Israel, where many parents refuse to teach their children reading and writing until they’re at least 7 years old.

“Many of these mothers are following educational practices of these countries,” said Lee Gi-sook, professor emeritus of Ewha Womans University in western Seoul. “They believe that teaching their kids how to read and write early on actually curbs their creativity.”

“The alternative type of education more parents are supporting these days will help develop bright minds in this country, minds that will be adept at communication and cooperation with others,” said Jeong Jae-young, professor of education at Ewha. “The current education system emphasizes fast and early education and will only produce overly competitive and isolated students.”

The Ministry of Education is also following the trend. It extended the hours spent on reading and writing in Korean from 27 hours to some 60 hours for first graders, a measure to help the parents who are choosing not to teach their children reading and writing until they enter school.

The Ministry of Health and Welfare also included policies to protect children and adolescents’ right to play and have leisure time in the four-year child policy plan from 2015 to 2019.

The new trend in education may be welcomed by the students themselves.

According to the Welfare Ministry’s recent survey on 2,099 people including elementary, middle and high school students throughout the country, 7 out of 10 elementary school students said they “want more time to play and have fun in life.”

The percentage was even higher among the higher grades, where nine out of 10 middle school students and eight out of 10 high school students said the same. And students across all ages said their rights as children and adolescents are infringed upon by “too much pressure to study.”

Despite the growing number of parents who opt to delay their children’s reading and writing education until they enter school, the general pressure to study begins at a young age here.

According to a survey released by the Korea Institute of Child Care and Education in December, 35.5 percent of 2-year-olds and 83.6 percent of 5-year-olds are receiving private education for reading and writing in Korean or English or in basic math.

According to the study, 69.4 percent of parents of 2-year-olds receiving private education say they are teaching their children at the right age, while 26.9 percent of the parents of the 2-year-olds say they feel they’re behind in teaching their kids reading and writing. “A cram school director told me that my 4-year-old daughter is already too late to start on reading and writing,” said a 32-year-old mother surnamed Lee. “So I registered her with the cram school immediately.”

A 6-year-old student at a cram school for math in Daechi-dong, southern Seoul, has been receiving private education since she was 10 months old. It began with a music class, then English, ballet and arts classes when she turned 1, then reading and writing, traditional Chinese characters, math and English when she turned 2.

“I want to send my daughter to an elite school, so when she turned 4, I sent her to the mathematics cram school, and last year, I added an arithmetic school on her list,” said her 40-year-old mother.

Some have called such intense early education a form of child abuse.

“Early private education for the children is a mental and emotional abuse,” Cho Youn-jin, a senior in college, posted on the online platform created by the JoongAng Ilbo and JTBC called the People Mic last week. “Many parents feel this type of early education is no longer an option but a necessity to help their children succeed in this competitive society.”

“I see elementary school students eating alone at fast-food chains and convenience stores near their cram schools in the Gangnam District area in southern Seoul,” posted another user Hwang Byung-joon. “I don’t know why they have to suffer so much at an early age.”

Experts say the problem lies with a general belief in society that early education is the way for the kids to have a successful life.

“More parents are pursuing early education for their children, believing that getting into good high schools will widen their prospects for entrance into top universities,” said Lee Byung-min, professor of English education at Seoul National University. “More want to send their kids to elite, science-focused or foreign language high schools.”

“Some elite middle schools take in applications for students when they’re in second grade in elementary schools,” said Ahn Sang-jin, deputy director of a civic group on private education. “So some parents send their kids to cram schools as early as kindergarten.”

“As long as private cram schools continue to market early education as the way toward elite schools, it will be difficult to change anything,” said Joo Seok-hoon, principal of Mirim Girls’ High School in Gwanak District, southern Seoul. “We have to change their attitude and approach to education first.”