Slumps are part of the ride, says bobsled coach

Slumps are part of the ride, says bobsled coach 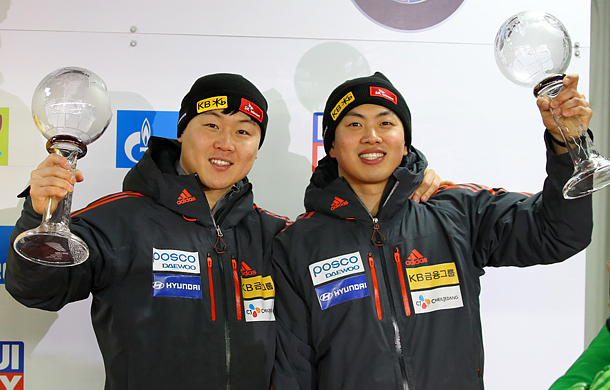 Slumps in sports can be relative, especially in the mind of Korean bobsleigh coach Lee Yong.

For the 2016-17 season, which wrapped up Saturday in Pyeongchang, Gangwon, the Korean host of the 2018 Winter Olympics, Won and Seo ended up in third place overall. They failed to win a race and posted just one top-three finish in eight starts.

They ranked fifth in the final race Saturday at Alpensia Sliding Centre to move from fourth to third in the overall standings. And Lee bristled at the notion that Won and Seo had a down year just because they couldn’t defend their crown.

“People say they struggled this season, and they still finished third in the world,” Lee said Saturday with a wry smile. “I don’t know what to make of that. I just think people’s expectations have increased.”

Korea had never fielded a competitive bobsleigh team until Won and Seo emerged in the 2014-15 season, when they ranked 11th in the World Cup standings. With the overall title last season, they were immediately pegged as the country’s best hope for its first Winter Olympics medal in a sliding event.

Lee said the objective had always been to build up slowly for the PyeongChang Olympics and make sure the athletes would peak at the right moment.

“Our initial goal was to be in the top five this season and then the top three next season, before going for the gold medal in Pyeongchang,” the coach said. “I think it’ll be better to stay around the top five position and then take our best shot at the Olympics.”

The winless season for Won and Seo has been blamed on their inability to adjust to a new sled and also some discord within the national team that led to the departure of two longtime engineers.

Lee said there is “a more than 90 percent chance” that the two will rejoin the national team.

As for the sled, built by Hyundai Motor, Lee said it’s up to the athletes to keep working with it and be 100 percent comfortable.

Reflecting on the season, Won said it has all been a “good learning experience.”

“If this had been the Olympic season, it would have been really tough to handle,” he said. “But if we can overcome this adversity, we should get much better in the future. Our goal for the Olympics is obviously to win the gold medal.”

Seo said the up-and-down season only brought the entire team much closer, and he and his teammates will look to use it as fuel for the Olympics.

Lee said he hopes to make the most of the home track advantage. In sliding events, familiarity with nooks and crannies of a track are considered critical to success. Olympic champions have often come from host nations.

“We’ll try to put in more than 500 practice runs here over the next year or so,” Lee said. “I want our athletes to be able to slide here with their eyes closed.”