A leader of lemmings

A leader of lemmings 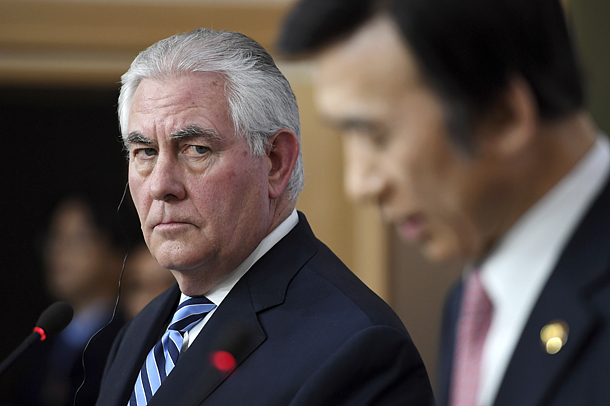 With the Korean Peninsula’s geopolitical situation in an unpredictable state, candidates for the South Korean presidency must set their foreign affairs and North Korea policy direction straight. Over the weekend, the contenders pitched their vision and agenda while U.S. Secretary of State Rex Tillerson made his first trip to East Asia. Unfortunately, their direction was out of tune with what the United States, China and Japan had in mind. None of the candidates appear to be a reliable guide. Their broken compass could lead to a path of doom.

In Beijing on Sunday, Tillerson and his Chinese counterpart, Wang Yi, posed in front of cameras stone-faced. Tillerson said that tensions on the Korean Peninsula were at a “rather dangerous level.” He might be suggesting the situation is graver than he had imagined. The hard faces of the top diplomats from two of the world’s top superpowers each patronizing the two Koreas indicate ominous signs for Seoul and Pyongyang.

We cannot exactly know what had been discussed at their meeting. The hostile mood could have stemmed from the territorial dispute in the South China Sea, Taiwan and the imbalance in bilateral trade. They did not share details of their talks. They also did not mention deployment of the U.S. military’s Terminal High Altitude Area Defense (Thaad) missile shield in South Korea for which China has been barraging Korean companies with trade retaliation.

Both sides could have prioritized key and auxiliary interests for bargaining. Beijing could have demanded Washington back off from the South China Sea in return for yielding in the Thaad issue. Ideological differences no longer influence the two global powers’ decisions. They will entirely focus on present terms and future interests.

In South Korea, candidates from the main opposition Democratic Party who lead in popular polls share the common agenda of divorcing from past ills. Seongnam Mayor Lee Jae-myung is against deployment of Thaad, claiming it will do more harm than good. Lee may be popular with staunch left-wing supporters with a traditional anti-American sentiment. But to most Koreans, he poses as a leader that could marshal the nation toward a highly dangerous path.

Moon Jae-in, the most promising candidate, appears to be living in the past. He reiterates that installment of Thaad should be decided by the next administration. He is nervous about losing favor from his stronghold of trade unions. His antigovernment activist days and his dissident support base used to revolting against meddling global powers must have deafened his insight and creativity on security issues. Because of his ambiguous attitude, both Washington and Beijing are skeptical of his capabilities. American commentators paint him as an opportunist while China sees him as someone easy to tame.

The conservative Liberty Korea Party is entirely directionless. Candidate Kim Jin-tae vowed to support now removed President Park Geun-hye till the end regardless of the controversy. Most of the contenders are stuck in their own world or in the past. In such perilous times, we cannot place our fate in these unreliable hands.

The candidates can be compared to lemmings, small rodents the size of a thumb usually found near the Arctic. Their population booms periodically and then disperses in all directions as they search for food and shelter. During mass migration, they even fall off cliffs after blindly following their herd leader. A leader’s virtue is not in perseverance, good personality or even sincerity. He or she must be a good guide. The leader must find the perfect path and destination for the community and persuade the members to follow.

The doom of misled lemmings underscores the importance of a wise community leader. Someone with poor judgment and reason could ruin the community and its future. Korea is a mature democracy in which any foolish and impotent leader can be replaced. Nevertheless, we cannot afford to undergo another dangerous experiment of impeaching and electing a president in less than three months. That path is one we must not go through again.