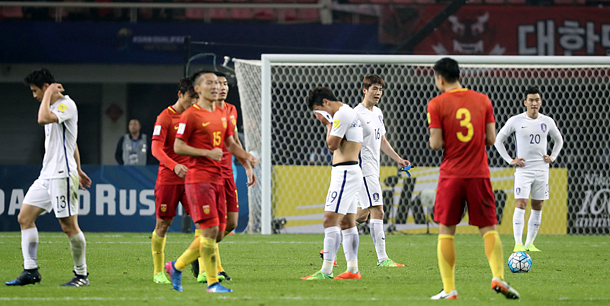 The Korean football team, in white, lost 1-0 against China in a World Cup final qualifying match on Thursday at Helong Stadium in Changsha, China. [Yonhap]

Korea suffered a stunning 1-0 loss to China in the World Cup qualifying campaign on Thursday.

Korea surrendered the winner to Yu Dabao in the first half to pick up their second loss in the final Asian qualifying round for the 2018 FIFA World Cup. Both Korea and China are in Group A, along with Iran, Uzbekistan, Qatar and Syria.

The defeat at Helong Stadium in Changsha, Hunan Province, leaves Korea in danger of losing No. 2 spot in the group. The Taeguk Warriors are stuck at 10 points with three wins, one draw and two losses and could drop down to third place depending on the match result of Uzbekistan and Syria later. Uzbekistan began the day with nine points.

Only the top two teams directly advance to the World Cup in Russia, while the third-place team must go through playoff rounds to enter the world football's showpiece event.

China ended their winless drought in the final round after two draws and three losses. They also avenged their 3-2 defeat to Korea in Seoul last September.

Korea fell to China for the first time since 2010, when they were blanked by the Asian neighbors 3-0 at the East Asian Cup. Korea, however, still boast a superior head-to-head record against China with 18 wins, 12 draws and two losses.

Korea, looking for its ninth straight World Cup appearance, will next face Syria in Seoul on Tuesday.

Korea and China met amid growing tensions between their governments over the deployment of a Terminal High Altitude Area Defense (Thaad) battery. In what appear to be retaliatory actions over Korea's decision to install the U.S. anti-missile system, China has banned sales of Korea-related tour packages and cracked down on business operations of some Korean companies.

To prevent possible violence against Koreans, nearly 10,000 police officers were also in attendance at Helong Stadium with some 30,000 Chinese supporters.

China's right back Zhang Linpeng fired the first shot of the match just one minute after the kickoff that sailed over the net. Korea posted their first strike in the 15th with Ji's left-footed attempt.

Both sides exchanged shots in the 29th. Yu Dabao's shot in the box went straight to Kwoun, while Nam's curling effort narrowly missed the target.

China, led by World Cup-winning coach Marcello Lippi, broke the scoreless deadlock in the 34th after Yu headed down Wang Yongpo's corner. This was their first goal at home in the final qualification round.

Korea's Ji almost pulled off an equalizer in the 42nd, but the FC Augsburg forward's header off Nam's corner was slightly higher than the target.

Korean captain Ki blasted a low effort in the 59th, and sent a right-footed strike five minutes later, but both of Swansea City midfielder's attempts were denied by Chinese goalkeeper Zeng Cheng.

China tried to further punish the visitors with Wu Xi's strike in the 68th, which was tipped away by Kwoun, and Zhang Xizhe's long range strike in the 70th went wide. Ji had a promising chance in the 75th as he headed down Nam's cross, but Zeng made a superb save to deny the Korean. In the 81st, Hong's header off Nam's corner was blocked by Wu Xi standing at the right corner of the net.

Stielike made his final substitution in the 84th as Heo Yong-joon came on for Nam in his international debut. But the Jeonnam Dragons winger failed to make a big impact.

Korea were given four minutes of extra time, but failed to unlock China's dogged defense.