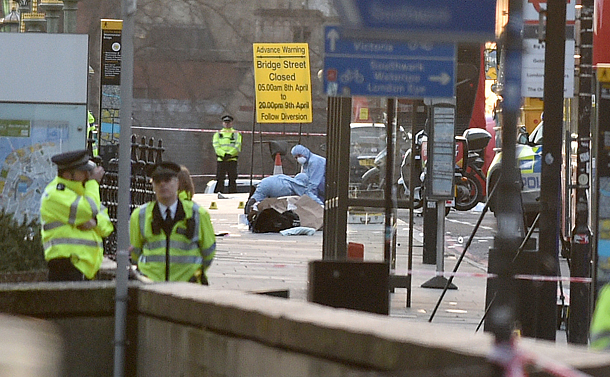 Emergency services staff and forensic officers work on Westminster Bridge in London, England, on Wednesday. Four people have been killed, including the stabbed officer and a male terrorist, and at least 40 injured in an attack on the Houses of Parliament Wednesday afternoon in a terrorist attack, police announced. [XINHUA/YONHAP]

At around 2:40 p.m. on Wednesday, a knife-wielding man went on a deadly rampage and crashed his vehicle, a Hyundai Tucson, into pedestrians on London’s Westminster Bridge.

The Korean woman, who injured her head after she was knocked over when people tried to flee the deadly driver, received surgery at London’s St Mary’s Hospital and was awaiting results as of Thursday afternoon.

According to the Foreign Ministry, the other four victims have been released from the hospital and will return to Korea Friday.

The Foreign Ministry sent out a warning text message to Koreans visiting the United Kingdom in response to the terror attack.

Mark Rowley, the Metropolitan Police counterterrorism chief, said police believed there was only one attacker and that Islamic extremism was suspected in the attack.

She then vowed, “We will all move forward together, never giving in to terror and never allowing the voices of hate and evil to drive us apart.”