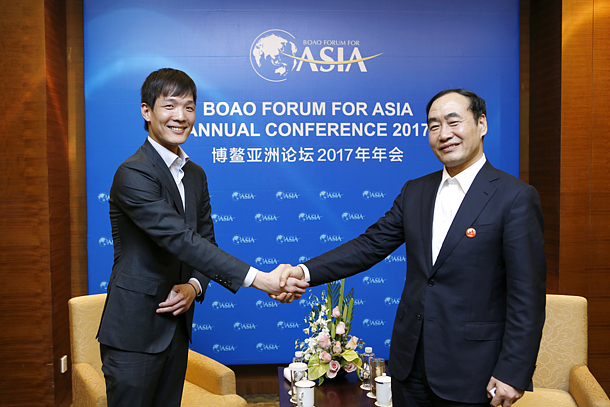 Kim Dong-won, head of the fintech and innovation center at Hanwha Life, left, shakes hands with Zhao Haishan, deputy mayor of the northeastern Chinese city of Tianjin, after a meeting at the 2017 Boao Forum on March 24. [HANWHA GROUP]

Hanwha Group hosted a roundtable discussion on Sunday with 20 Asian start-ups at the 2017 Boao Forum for Asia Annual Conference in China. It was the first Korean conglomerate to host such an event at the forum.

Hanwha has participated in the annual conference, often nicknamed “Asia’s World Economic Forum,” for a fourth consecutive year. This year’s participation comes at a time of sour relations between Korea and China over a missile row.

The roundtable discussion included 20 start-up founders in their 20s and 30s from Korea, China, Japan, India and Thailand who shared stories of their trials and successes.

“We hosted the roundtable to discuss how much creative influence Asian countries, which boast a long history and tradition, can bring to the global market,” said Kim Dong-won, head of the fintech and innovation center at Hanwha Life, after the roundtable. “If Asian start-ups can be interconnected with each other, it can lead to much greater potential.”

Kim vowed to step up support for DreamPlus, a Hanwha start-up accelerator that he has been overseeing. Kim said he wants start-ups in the organization to grow into unicorns, which refer to start-ups that are not listed but valued at more than $1 billion.