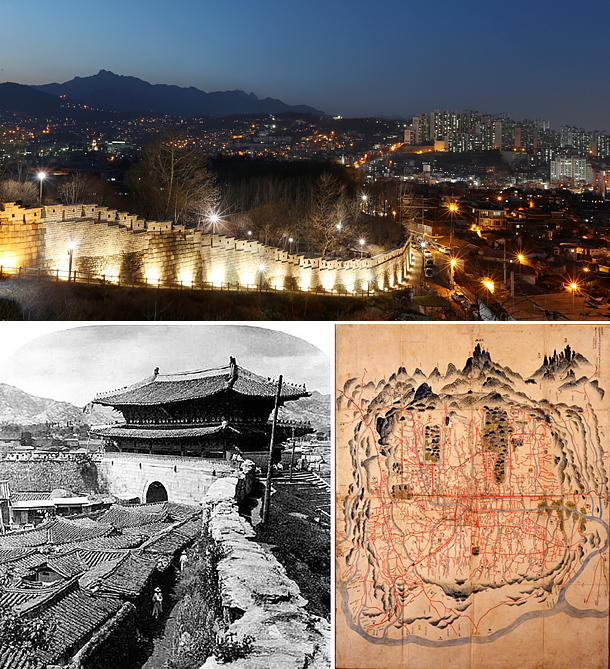 Clockwise from top: The Seoul City Wall; An ancient map of Seoul, which was previously called Hanyang; Sungnyemun was one of the eight gates that were part of Seoul City Wall [YONHAP, JOONGANG ILBO]

Korea’s ambition of adding the Seoul Wall, otherwise known as Hanyang Fortress, to the list of Unesco’s World Heritage sites has been put on hold.

This comes as an advisory body to Unesco recently concluded that it’s unclear how the wall, built in 1396, is distinct from other city fortresses that made it on the list.

Critics say with this unexpected failure, local Korean governments should refrain from competitively working to add their cultural heritage sites to the Unesco’s World Heritage List and reassess their strategies.

The Cultural Heritage Administration (CHA) confirmed last week that Korea will withdraw its bid to add the wall to the Unesco list. This came as a surprise, as the Korean government has been working for the designation for at least five years and was hoping to hear good news in July, when the World Heritage Committee will meet and review applications.

The Korean government submitted the relevant materials to Unesco for the bid in January of last year. As is the process, an advisory body called International Council on Monuments and Sites (Icomos) has already reviewed the bid. Icomos officials visited the wall in September.

The 14-member advisory panel, however, concluded in its final review stage “not to inscribe,” CHA said, saying while it has qualifications for a World Heritage Site - including authenticity and plans for preservation - it failed to differentiate itself from other city fortresses on the Unesco list.

As it’s practically impossible to reverse the decision at the World Heritage Committee meeting, the Korean central government and the Seoul metropolitan government - both of which have been working for the designation - announced that they will work toward another try in 2020.

“Competition among countries is getting fiercer,” an official at CHA said, referring to global attempts to inscribe their cultural assets on the Unesco list. “With this, we will thoroughly review our bid and conduct more research.”

Observers agree that the World Heritage Committee’s review is getting stricter. In its meeting in October last year, it reviewed 35 applications, down from 45 the year prior. It also last year limited the number of bids a country can submit every year to one, from two in the past.

Korea also recently experienced a bump in the road in making one of its cultural heritage items a world treasure. In April of last year, a decision was made to withdraw the application to include seowon, or Korean Confucian academies, on the Unesco Heritage List.

Korea attempted to inscribe nine seowon on the list, but the Icomos panel pointed out that there seems to be a lack of a common thread between them. Korea also failed to convince the panel exactly how Korean seowon are different from those in Japan and China. Seowon was a type of educational facility of the Joseon Dynasty (1392-1910) that also functioned as Confucian shrines.

In 2012, the Seoul metropolitan government set aside about 32.7 billion won ($29 million) and launched a team in charge of the preparations for the bid. The following year, it moved the mayor’s residence so that the existing residence could be used as a special facility for the preservation of the city wall.

A scholar told Yonhap that it appears Korea failed to explain fully how the Seoul Wall is different from the two. “Most of Korea’s previous bids were approved, so the Cultural Heritage Administration and local governments appear to view the World Heritage List as rather easy.”

It’s true that Korea has rarely experienced failure in its previous attempts to add its cultural heritage sites to the Unesco World Heritage List. Currently, Korea has 12 sites on the list. The only time Korea’s bid was rejected by Unesco was in 2009 when Korea’s “Cretaceous Dinosaur Coast” in South Jeolla was rejected.

With this, many local governments have flocked to add some of their cultural heritage sites to the Unesco list. There are more than 20 official submissions to CHA, sources say. They include Buddhist temples in Wonju, Gangwon and Korean War (1950-53) refugee relics in Busan.

Heads of local government have also made numerous pledges to add some indigenous heritage sites to the Unesco list. They include Namwon, North Jeolla, who hope to include on the list their relics of Gaya, a confederacy of territories in southern Korea between the first and sixth centuries; and Geoje, South Gyeongsang, which says it will add to the list their sites related to POWs from the Korean War.