Sewol’s return to land delayed by a few more days

Sewol’s return to land delayed by a few more days 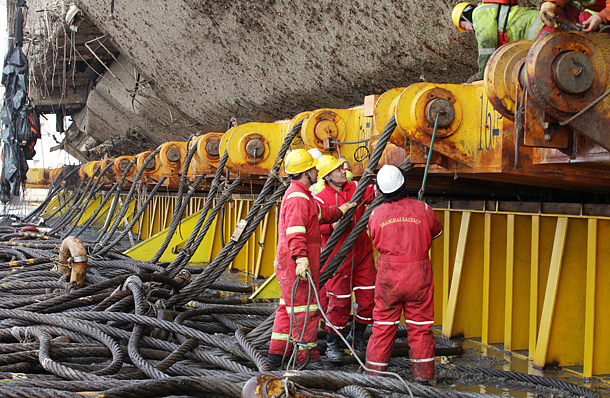 Workers remove wires connected to lifting beams that were placed beneath the hull of the Sewol ferry on a semi-submersible ship Monday to prepare to sail to a port in Mokpo, South Jeolla, where the cause of the ferry capsizing will be investigated. [YONHAP]

The doomed Sewol ferry, resting on a semi-submersible ship southwest of Jindo, an island in South Jeolla, will not be ready to leave for Mokpo until Thursday at least, the Ministry of Oceans and Fisheries said Monday. Preparing the wreck for transfer to a dry dock will take a few additional days.

Before the ferry leaves for Mokpo, it should be drained of as much seawater and oil as possible and fastened to the semi-submersible ship carrying it.

Four buoyancy tanks installed on the semi-submersible ship must also be removed in preparation for modular transporters that will slide under the ferry to wheel it onto the dry dock, where it will be examined for missing bodies and the precise cause of its capsizing on April 16, 2014.

“If all goes as planned, the Sewol will reach the Mokpo New Port around Thursday or Friday,” said Kim Young-suk, minister of oceans and fisheries, on Monday.

“The ferry is expected to be put on land around April 5 or 6, and investigations into the ferry will begin around April 10.”

The ferry, lifted from the seabed 44 meters (144 feet) under the surface of the water starting Wednesday, was hoisted completely out of the water on Saturday evening.

It was the first time in nearly three years that the 6,825-ton ferry that capsized off Jindo, taking 304 lives, emerged from its watery grave.

Workers from Shanghai Salvage, a state-run Chinese company working with the Oceans Ministry to hoist the ferry out of the water, continued draining the ship of seawater and oil Monday. The ballast tank is to be completely drained today.

“Much of the mixture of oil and water escaped the ferry as it rose out of the water,” said Lee Cheol-jo, head of the Sewol salvaging committee of the Oceans Ministry.

“The process of puncturing the bottom of the ship to drain this area will start once the ferry reaches land.”

“Balance is key in this operation of moving the Sewol onto dry land,” said Chung Ho-won, deputy director of a salvaging company that participated in the salvage of the Cheonan warship, which was sunk by North Korean torpedo fire in March 2010, although Pyongyang denies it.

“If there is an imbalance in the process of moving the ferry onto the dock, the ferry can tip over to one side.”

Probing the interior of the ferry for missing bodies and the causes for its capsizing will begin once the ferry is safely on land.

The remains of nine of the 304 victims are still missing. Relatives are concerned that the remains are inside the ferry.

The Oceans Ministry and Shanghai Salvage will also investigate the seabed where the Sewol ended up from early April, the ministry said.

Divers will search for missing bodies and articles from the victims within a 3-meter high, 160-meter by 200-meter mesh-fence that was installed around the wrecked ferry in April 2016.