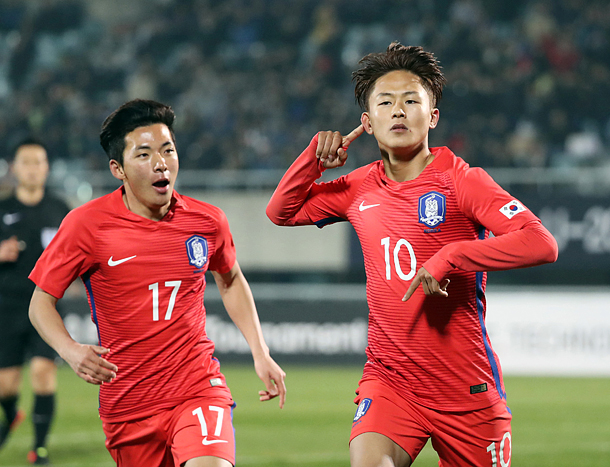 Lee Seung-woo, forward for the U-20 national football team, celebrates after scoring a goal against Zambia at the FIFA U-20 World Cup friendly match in Cheonan, South Chungcheong Province, on Monday. [YONHAP]

Korea beat Zambia 4-1 to collect their second straight win at a FIFA U-20 World Cup test event here on Monday.

FC Barcelona Juvenil A forward Lee Seung-woo grabbed a brace, while his club teammate Paik Seung-ho scored a goal and set up another at Cheonan Stadium in Cheonan, some 90 kilometers (56 miles) south of Seoul, for Korea’s impressive performance against Zambia.

Gearing up for the U-20 World Cup as the host, Korea invited Honduras, Zambia and Ecuador for the current tournament as a warm-up for players under 20. Those three teams are also participants of the U-20 World Cup, which will be staged in six Korean cities from May 20 to June 11.

Korea now leads the tournament with two wins. The young Taeguk Warriors beat Honduras 3-2 in their opening match on Saturday.

Zambia have one win and one loss in the four-nation tournament. They previously blanked Ecuador 2-0.

It was Paik who scored the first goal of the match. Zambian goalkeeper Mangani Banda failed to clear left back Woo Chan-yang’s cross and the ball went to Paik, who struck with his right foot for the 1-0 lead in the 31st.

Lee then stepped up to give the lead back to the hosts in the 40th. Paik dribbled past Zambian defenders on the right flank and found Lee, who fired home a right footed effort inside the box.

In the 69th, Lee entertained Korean supporters after he chipped the ball over Banda for a 3-1 lead. Korea then further punished the visitors when Lim Min-hyeok tapped home a Ha Seung-un cross in the 78th.

Korea, however, couldn’t leave the match with a big smile after defender Jeong Tae-wook fell to the ground unconscious in the 80th following his collision with Zambian midfielder Kenneth Kalunga in the air. Jeong was subsequently rushed in an ambulance to a local hospital.

Due to the incident, the match had seven minutes of extra time, but neither team added to the tally.

Korea will next play Ecuador in Seogwipo on Jeju Island on Thursday to wrap up the tournament. Earlier Monday, Ecuador pipped Honduras 2-1, thanks to Jhojan Julio’s winner in the second-half extra time.’

Coach Shin said he was satisfied with the team’s performance.

“Our players showed their abilities 100 percent,” he said after the match. “They displayed all the things that I ordered.”

Korea are paired with Argentina, England and Guinea in Group A at the U-20 World Cup. Shin has been saying that his side needs to play a lot of matches with African teams to gain experience ahead of the FIFA competition.

“African teams are dangerous and flexible,” he said. “We played intimidated for about the first 20 minutes, but after that period, the players were able to create their plays and that’s the biggest thing we earned.”

Shin entered the tournament with 26 players, and he will have to cut some of them to finalize the 21-man squad for the U-20 World Cup.

“We have new players who didn’t participate in our training in Portugal, but they’re coming along very well,” he said. “For the match against Ecuador, we’ll use lots of new players.”