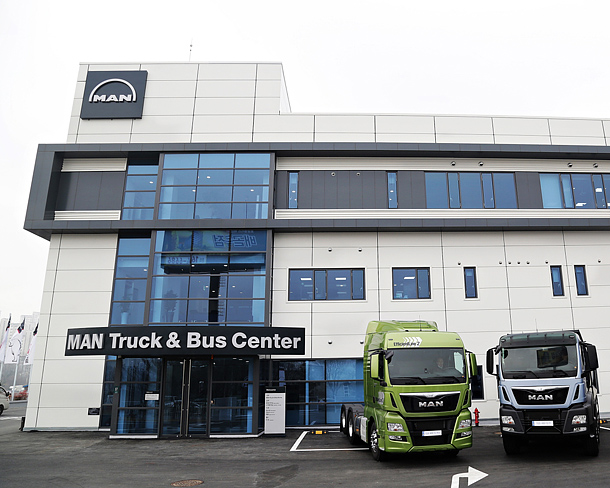 The new building is located in the city of Yongin, Gyeonggi, about 25 miles south of Seoul.

Its construction comes after Gyeonggi Gov. Nam Kyung-pil visited Germany last year and signed an investment deal worth $10 million with MAN to build a local headquarters in the region.

The company’s service center has 12 bays to provide maintenance services to customers.

“Construction of the Korean headquarters is part of our mid- to long-term development strategy and to boost our competitiveness in the Korean market,” MAN said in a press release.

Max Burger, president of MAN Truck & Bus Korea, said, “We hope to be able to respond flexibly to the rising consumer demand of MAN trucks in Korea.”

Last year, MAN sold 1,545 of its vehicles in Korea, a 36 percent rise from the previous year, to post a sales record in the country. As a result, Korea was selected as the “best truck market in the world” by MAN’s headquarters in Munich for three straight years.

“Korean customers are strict and particular when it comes to the quality of their demand in products and services,” Low said. “As it is one of seven core markets for the company, the group continues to provide support and investment, and construction of the new headquarters means the quality of our customer service will improve.”

The company has made improving maintenance service a key agenda in Korea.

Last year, MAN opened new centers and expanded existing ones, including in Incheon and Pohang, North Gyeongsang. New service centers in Busan and Jeonju, North Jeolla, are scheduled to open sometime this year.

At the 2017 Seoul Motor Show, which starts on Friday, MAN will unveil four premium products for the Asia region that will strengthen its portfolio in the local market.