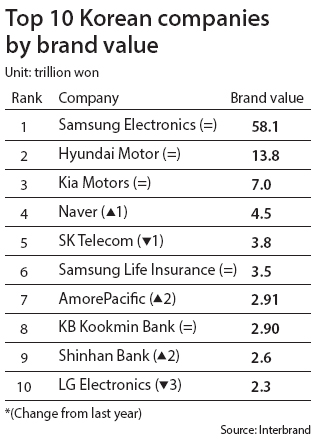 Samsung Electronics, Hyundai Motor and Kia Motors were the top three Korean companies in terms of brand value for a fifth straight year in Interbrand’s annual evaluation of the country’s best-performing companies.

The U.S.-based brand consulting firm on Wednesday unveiled its 2017 list of 50 Korean companies with the highest brand value. Interbrand’s valuation is a numeric representation of how a company’s brand power contributes to its business activities.

Samsung Electronics once again topped the list by a wide margin with 58.1 trillion won ($52.1 billion). Interbrand lauded the tech giant’s handling of the Galaxy Note7 debacle last year that ended in the company’s largest recall after reported incidents of the smartphone overheating and exploding. The biggest factor in the brand’s valuation, though, was its semiconductor business, from which the company is expected to see big profit this year.

Hyundai Motor received the next highest mark for establishing its premium brand Genesis that helped diversify its business portfolio. Its smaller affiliate Kia Motors, in third, was noted for raising stable profit from multiple product lines, including the Niro and K7, as well as strengthening its stance in Europe’s small-size vehicle market.

Companies with the fastest growth this year in terms of brand value were software giants Kakao and Naver and cosmetics maker AmorePacific.

Naver, operator of Korea’s top search engine, broke a record this year, growing 20 percent from last year and moving up to fourth for the first time. Interbrand pointed to the tech company’s latest forays into artificial intelligence research and autonomous driving technology, putting it at the forefront of cutting-edge R&D.

The brand value of Kakao, operator of the country’s most widely used messaging app, rose 31 percent.

Ranked 30th, the company was acclaimed for several moves last year to shift its identity from that of a messaging app provider to a diversified platform that offers conveniences like cab hailing.