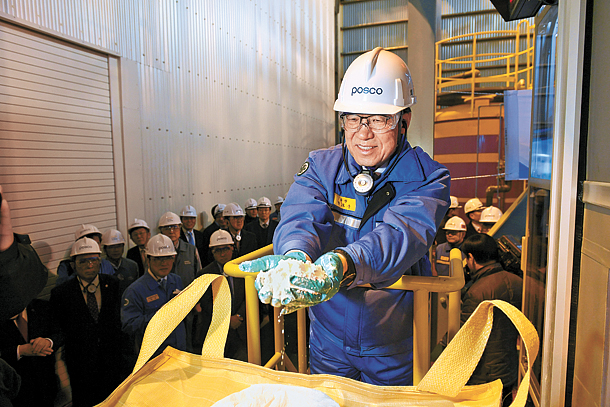 Posco shareholders approved another three-year term for Chairman and CEO Kwon Oh-joon during a general meeting on March 10.

The former CTO has fortified the company’s structure through cost-cutting measures and drastically improved profitability. An expert on steel technology, Kwon increased sales of the company’s world premium products by employing an efficient marketing strategy.

After taking over as CEO, Kwon completed 126 cost-cutting measures that led to 5.8 trillion won in profit. During his term, he lowered the company’s debt by 7.1 trillion won and maintained its lowest debt ratio since Posco was established.

The company’s share price has been hitting records for the past 52 weeks and increased by 60 percent compared to last year.

In addition, Posco has produced tangible outcomes in its non-steel businesses, including production of lithium carbonate, an essential material for electric cars, laptops and phone batteries. Last month, the company completed a lithium carbonate factory that can produce 2,500 tons annually.

Despite tough market conditions from an oversupply of steel, the company plans to invest an additional 1 trillion won this year, 400 billion won of which will be invested in non-steel businesses like lithium, nickel, magnesium and titanium.

With his next three-year term, Kwon plans to apply smart technology to production and sales, utilizing artificial intelligence, big data and Internet of Things technology to improve efficiency. Posco will also focus on new businesses like lithium-ion battery materials, lightweight materials for cars and airplanes, and renewable energy.

From February 26 to early March, the CEO visited Siemens in Germany and General Electric in the United States to learn about their strategies, as these companies have successfully incorporated smart technology into their factories.