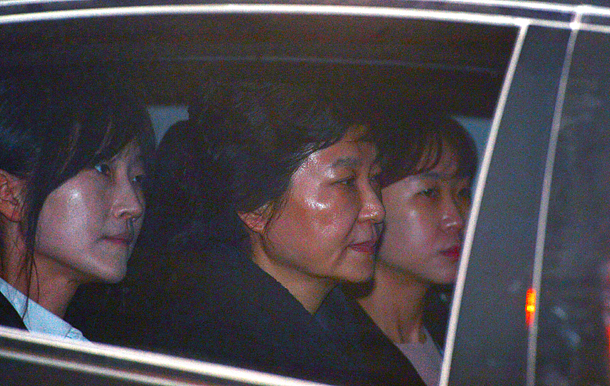 Former President Park Geun-hye rides in a vehicle with investigators heading to the Seoul Detention Center early Friday morning after a local court issued a warrant to detain and investigate her. [YONHAP]

Former President Park Geun-hye was locked up at the Seoul Detention Center early Friday morning after a local court issued a warrant to detain and investigate her about a series of crimes she allegedly committed during her failed presidency.

After the longest arrest warrant hearing on record, the Seoul Central District Court issued the prosecution a warrant to take Park into custody. The hearing on Thursday lasted for eight hours and 40 minutes. Park reportedly denied all charges against her.

After eight hours of deliberation, Judge Kang Bu-yeong issued the warrant at 3:03 a.m. on Friday. “The prosecution proved the grounds for the main charges against Park,” Kang said. “There is concern about evidence destruction.”

Park, removed from the presidency on March 10, 2017, is currently facing 13 charges including bribery, abuse of power and leaking of confidential documents. The presidential immunity that shielded her from criminal prosecution since her inauguration in February 2013 was lifted with the Constitutional Court’s ruling that terminated her presidency.

While Kang deliberated the case, Park awaited his ruling at a temporary lockup of the Seoul Central District Prosecutors’ Office. After the warrant was issued, she was sent to the Seoul Detention Center. She sat in the middle of the back seat of a vehicle with female investigators on either side. The car entered the center around 4:45 a.m.

Special treatment she received as a former president, including security by the Presidential Security Service, stopped the moment she entered the detention center.

Park is the third former Korean president to be detained. Chun Doo Hwan was jailed for insurrection in 1995 and Roh Tae-woo for corruption in the same year. Roh was detained at the Seoul Detention Center.

According to the Ministry of Justice, Park was classified as a pretrial detainee. She was assigned to a solidary cell and the standard procedure for a new inmate was followed, including an identification check, medical checkup and strip search. A mug shot was also taken.

Park was ordered to surrender her personal belongings and changed from her clothes into a prison uniform. According to sources in the legal community, Park removed her hairpins and washed off her makeup at the prosecution lockup before heading to the detention center.

According to the ministry, a solitary cell in the Seoul Detention Center is normally a 67.6 square-foot room equipped with a mattress, shelf, TV and a desk. A sink and a toilet are also located inside the room. There is a possibility that she was given a slightly larger cell, as former President Roh was.

Choi Soon-sil, Park’s longtime friend and an alleged co-conspirator in the corruption and abuse of power charges, is also being detained at the center. Others involved in the scandal, including former presidential chief of staff Kim Ki-choon, former culture minister Cho Yoon-sun and Samsung Electronics Vice Chairman Lee Jae-yong, are also locked up at the center.

The center said there is no possibility that Park will meet her associates inside the center, as there is a principle to prohibit meetings of alleged co-conspirators.

According to the ministry, Park would be offered three meals a day based on the center’s menu schedule. She will have to wash her own food tray.

Park will have to follow the center’s daily schedule. Wakeup time is set at 6 a.m. and bedtime is 8 p.m. She will be allowed 45 minutes of physical exercise time daily.

A pretrial detainee is allowed to meet lawyers in a special interview room freely from 9 a.m. till 6 p.m. She is expected to meet frequently with lawyers to prepare for the upcoming investigation, prosecution and trial.

The warrant allows the prosecution to hold Park until April 19, and prosecutors will have to complete additional investigation and indictment by then. The prosecution said it will not question Park Friday, her first day of detention, and speculation is high that the grilling will begin next week.

The special investigation team will likely dispatch investigators to the center for questioning in order to avoid security hassles. If Park leaves the detention center to go to the prosecution for an interrogation, the Presidential Security Service will have to resume its protection of her.

Additional investigations into other conglomerates suspected of having offered bribes to Park, including SK and Lotte, will also pick up speed. The prosecution said Friday that it can summon Lotte Chairman Shin Dong-bin, if necessary, although there is no plan yet. The prosecutors already questioned SK Chairman Chey Tae-won earlier this month.