A renaissance for financial holding companies?

A renaissance for financial holding companies? 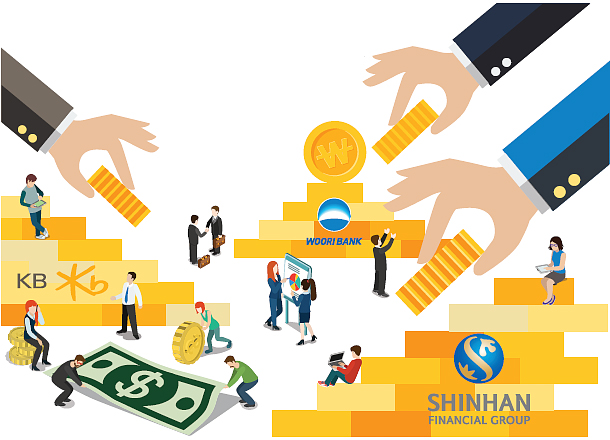 But ask them to name a financial firm, and they might draw a blank.

This was apparently enough to embarrass the Korean government, and in 2000, the administration of then-President Kim Dae-jung pushed companies to adopt financial holding structures, with the idea that a holding unit might provide an efficient base for overseas expansion and management of multiple financial services.

Seventeen years later, Korea’s major financial holding companies - KB, Shinhan, Hana and NH - have expanded in size but not much in global reputation. A majority of their profit still comes from retail banking inside the country, and the return on assets is a paltry 0.5 percent.

Hoping that financial holding units will drive growth at their subsidiary firms, the Financial Services Commission, the country’s top regulatory agency, is gearing up for another push to empower financial holding companies and offer them preferential regulatory treatment. While the industry is certainly welcoming the move, which is set to go into effect this year, skeptics believe the changes won’t deliver what the regulator wants.

The most notable - and potentially controversial - measure is a green light for financial groups to share users’ information for marketing purposes. Data sharing across affiliates was allowed until 2014, when the country suffered its largest theft of financial data that prompted the regulator to ban the practice.

“For now, we operate separate data centers for the banking unit and card company,” said a spokesperson at Shinhan Financial Group, the country’s largest financial holding company by assets. “But if data sharing is made possible, we will be able to recommend more suitable products for clients, which will translate into efficient marketing and lead to cost saving.”

Under the new measure, clients can still opt out of receiving unsolicited product or service information.

To foster cooperation across the board, the Financial Services Commission also wants to scrap an early notice policy where holding groups and their related units have to report in advance if they want to have executives assume multiple positions, especially in those not related to traditional banking. 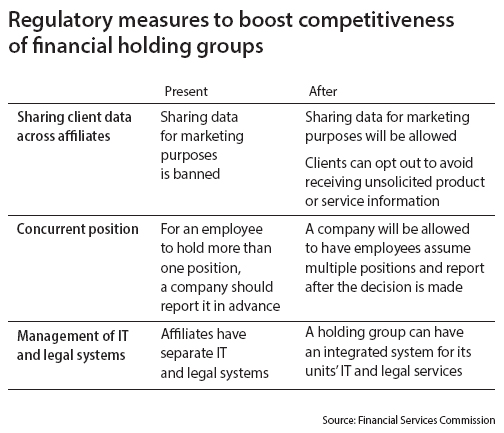 Since a bank affiliate boasts a majority share in both profit and assets, there has been frequent tension between the heads of holding groups and CEOs of their banking units. Shinhan Financial Group, KB Financial Group and the now-defunct Woori Financial Group all underwent such disputes big and small.

Under the new measure, the regulatory agency will require holding companies to establish a committee tasked with overseeing the group’s comprehensive direction. The Financial Services Commission will also issue guidelines to ensure the controlling bodies’ right to evaluate affiliates’ performance and manage personnel.

Still, critics see such measures as ineffective as long as banking units make up a large slice of the profit pie.

“Power comes from how much money they make,” a source in the investment banking industry said. “The entrenched problem is that financial holding companies are not willing to or incapable of diversifying their profits beyond the interest rate margin.”

The banking units of Korea’s four largest financial holding groups contribute more than 50 percent to the groups’ net profit. The share of KEB Hana Bank, for instance, stood at 95.3 percent as of last June, according to the Financial Services Commission. Shinhan had 62 percent, while KB had the lowest proportion at 57.2 percent, still a sizeable chunk.

On top of that, low growth and record-low interest rates have tempered the holding units’ return ratios.

“The four major players’ profitability has become low since they engage in tough competition,” said Ahn Yoo-mi, a researcher at Korea Capital Market Institute. “The effort to diversify their source of profit is required for further growth.”

Ahn noted that the portion of profit at the four holding companies that don’t come out of interest was 25.7 percent in 2015, while that of multinational peers like JP Morgan and Citigroup was 49.1 percent.

Some analysts say the weak standing of the holding companies stems from the limit on equity that they can have in their banking unit. The law prohibits a controlling group from having more than a 10 percent stake in its bank affiliate. The Financial Services Commission bans nonfinancial institutions from acquiring more than a 4 percent share in a bank to ensure transparency and safety in the financial services industry.

Jeon Sam-hyun, a law professor at Soongsil University, suggested that the authorities raise the bar to 20 percent for financial institutions. “As for financial holding units, the ceiling should be lifted up to 34 percent to go hand in hand with the global standard.” 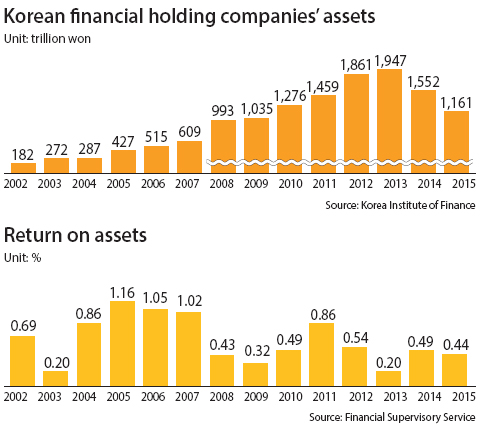 While their holding structures might not be perfect, it hasn’t stopped major players from trying to improve through a more horizontal and streamlined organizational structure.

In his New Year’s message to employees, Yoon Jong-kyoo, chairman of KB Financial Group, cited synergy across affiliates as the major initiative for this year. “This year, all affiliates should work in one team to maximize and make combined effects greater,” he said.

His call is particularly relevant this year because it marks the debut of KB Securities, which resulted from a merger between KB Investment & Securities and Hyundai Securities following a buyout worth 1 trillion won ($894.2 million).

Yoon said the group is benchmarking Bank of America Merrill Lynch, a financial institution that emphasizes both its banking and brokerage businesses.

To foster efficient cooperation among affiliates, KB has adopted a “matrix” organizational structure at the executive level to connect their traditionally vertical business units. The group added two more executives this year to its list of those holding more than one position, crossing KB Financial Group and KB Kookmin Bank. The chairman himself doubles as CEO and president of KB Kookmin Bank.

Shinhan Financial Group is increasing the number of combined financial services branches that offer a broad suite of services encompassing banking, insurance and brokerage. The company now has more than 40 such centers. 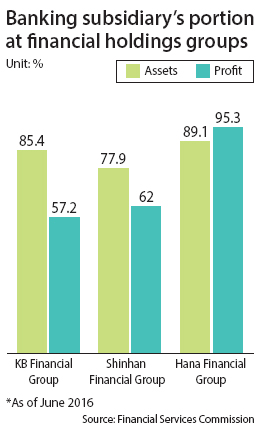 Shinhan and KB are currently the two biggest names in Korea’s financial industry, but the title of first financial holding company will always be held by Woori Financial Group.

Woori Financial Group, a state-owned holding company, first came into existence in 2001, right after the push by Kim Dae-jung’s government, but in the process of Woori Bank’s efforts to privatize, it sold off some key affiliates, including its brokerage unit, and ended its holding company structure.

Now, Woori is set to return to a holding structure as private institutions now own a sizable share of the bank. Lee Kwang-goo, CEO and president of Woori Bank, vowed to go back to the financial holding structure when he assumed his second term in January.

“When converted into a holding company, it will translate into better capital ratio,” he said. “In conducting mergers and acquisitions, the system helps us nimbly manage costs and financial arrangements.”

The CEO pledged to complete the change by the end of this year.

Industry observers initially expected Woori to file an application in April, but the influence-peddling scandal that brought down President Park Geun-hye appeared to delay the process.

“We have not yet filed an application,” a source at Woori Bank said. “Now, the bank is in a wait-and-see mode until the new administration takes office,” referring the next Korean president.

Even if financial authorities approve the application, it’s uncertain whether all the private shareholders will agree to it. “We don’t expect the process to be easy,” the source said.