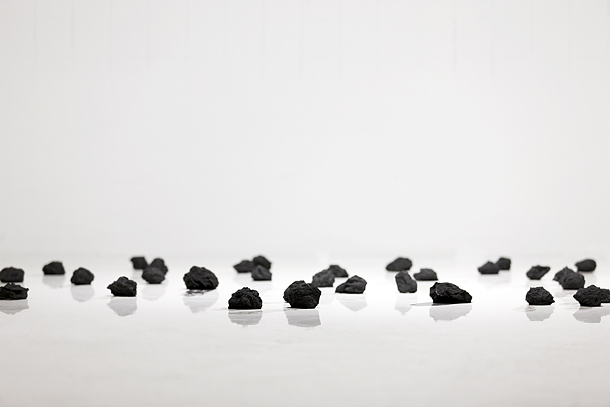 There is something unique about the spaces of Paradise Zip, a new gallery opened by the Paradise Culture Foundation last September. Once a house, the 80-year-old building has been renovated by famous architect Seung H-sang and given stark-white halls and corridors like modern galleries.

Still, the composition of Paradise Zip’s spaces and their details including the partly-exposed brick walls, although painted completely white, reveal that they were once part of a house. The exterior of the gallery shows the shape of a typical 20th-century house in Korea, though the outer walls and roof are also colored white. Accordingly, the gallery gives a strange impression of an ordinary house bleached white by some magical power or a house fading from a distant memory.

A Korean artist who might be the best fit for such a space recently started a solo exhibition here. That is Kim Ho-deuk, well known for his re-invention of East Asian aesthetics - in particular that of muninhwa, or philosophical paintings that consist of brush strokes in black ink and white black spaces.

The 67-year-old artist focused on almost-abstract paintings in meok, or East Asian black ink, on hanji, or Korean traditional paper, in his early days. Since the 2000s, he has been creating three-dimensional installation works by hanging from the ceiling a number of hanji sheets at intervals, while transforming the spaces between the sheets and their subtle movements into parts of his artworks.

Actually, the white square on the brick wall is just the opening that once was for a window before the house’s renovation into a gallery.

“The square looks like a white canvas that lures people to paint something on it,” the artist told the Korea JoongAng Daily last week. “I decided to couple it with a framed paper, questioning which is left blank and which is filled.”

From left, the exterior of Paradise Zip, a newly-opened art space which was once a house and then was renovated by the famous architect Seung H-sang. Artist Kim Ho-deuk’s installation work “Filling and Emptying” is on view at the gallery as part of his solo exhibition. The artist explains his work “Fullness, Emptiness,” from which the title of his solo show comes. [MOON SO-YOUNG, PARADISE ZIP]

Like this, Kim’s site-specific works on view in the exhibition have both playful qualities and deep philosophical questions.

The artist explained he reached the question when filling white hanji with black brush strokes for paintings. “At some point, I faced a paradoxical situation that the spaces I filled looked empty and the spaces I left blank looked protruding,” he said. “Then, it was very difficult for me to decide when to stop for balance. I want to express the paradox and questions through my works.”

These paintings “Wave of Mind, Awakening Moment - Space” are on display on the first floor of the gallery. They are hanging 3 centimeters [1.1 inches] apart from the walls, without frames. He began to install his paintings that way in the 2000s.

“I wanted to free my paintings on hanji from the traditional frames and from the wall,” he said. “Then, I became excited by transforming two-dimensional works into three-dimensional ones and creating space. ”

A total of 17 works are on view in the exhibit, including new 3D works created from hanji sheets. Among them, the installation “Filling and Emptying” consists of two piles of 100 hanji sheets. One pile is white and the other is black. The artist colored 100 hanji sheets with meok one by one. The effort created the pile’s unique and deep black color.

“So the work is not only about space but also about time,” the artist said.