Trump says if China doesn’t help, he is ready to handle North Korea on his own

Trump says if China doesn’t help, he is ready to handle North Korea on his own 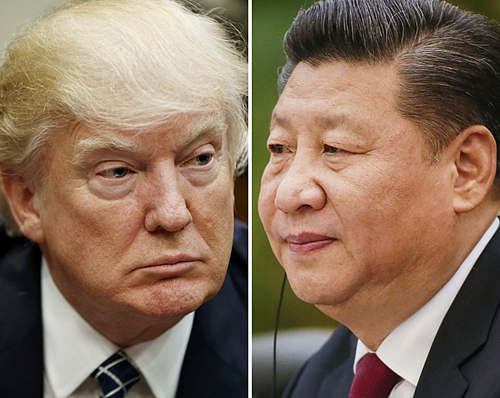 This combination of file photos shows U.S. President Donald Trump on March 28, 2017, in Washington, left, and Chinese President Xi Jinping on Feb. 22, 2017, in Beijing. Trump is suggesting ahead of his two-day meeting starting Thursday, April 6, 2017 with Xi that with or without Beijing’s help, he can “totally” handle North Korea, but his solution would have to be pretty clever. [AP/YONHAP]

Washington is prepared to solve the North Korean nuclear issue alone, with or without Beijing’s help, U.S. President Donald Trump said in an interview, ahead of his summit with his Chinese counterpart later this week.

Trump said in an interview with the Financial Times Sunday, “if China is not going to solve North Korea, we will.”

He had been asked how ambitious he wanted to be with Beijing, and whether he would consider some sort of grand bargain where China pressures Pyongyang in exchange for the removal of U.S. troops from the Korean Peninsula.

Trump is scheduled to hold his first bilateral talks with Chinese President Xi Jinping at his Mar-a-Lago resort in Palm Beach, Florida, from April 6 to 7.

"China has great influence over North Korea,” continued Trump. “And China will either decide to help us with North Korea, or they won't. And if they do that will be very good for China, and if they don't it won't be good for anyone.”

When asked if he thought he could solve the North Korea issue without China’s help, he asserted, “totally,” despite many Washington officials having underscored that Beijing is the key to reining in Pyongyang.

But the president did not give further details on his plans, or whether this would include "one-on-one" action with Pyongyang.
Trump added that trade can be used as leverage, saying, “It is all about trade.”

Washington officials have emphasized that all options are on the table with regard to Pyongyang, and the Trump administration has been undergoing a review of its overarching policy toward North Korea. U.S. Secretary of State Rex Tillerson’s first overseas visit to Tokyo, Seoul and Beijing last month dealt largely with the North Korea issue, as well.

U.S. Ambassador to the United Nations Nikki Haley told ABC’s “This Week” on Sunday that Washington will “no longer take the excuses from China,” adding it will “continue to put pressure on China to have action” on Pyongyang.

“The only country that can stop North Korea is China,” said Haley. “And they know that. And I think that you saw when Secretary Tillerson went to Beijing, that was a way of putting pressure. You're going to see President Trump meet with President Xi and a lot of conversation and the most important conversation will be how we're going to be dealing with the nonproliferation of North Korea.”

She said, “At some point, we need these definitive actions by China condemning North Korea and not just calling them out for it.”

Thus, the upcoming first summit between Xi and Trump is being observed closely as Seoul’s next president, to be elected in May, will have to review its policy toward North Korea amid Beijing’s backlash over the deployment of the U.S-led Terminal High Altitude Area Defense (Thaad) antimissile system.

South Korean Minister of Foreign Affairs Yun Byung-se told MBC on Sunday, regarding a possible sixth nuclear test by Pyongyang in April, that if “it conducts another provocation, we have to have a firm stance on how to respond. We will make sure North Korea feels a pain that cannot be endured.”

Yun added, “The next administration will have to understand why this government is trying to deploy the Thaad system as soon as possible even bearing with the difficulties in relations between South Korea and China.”