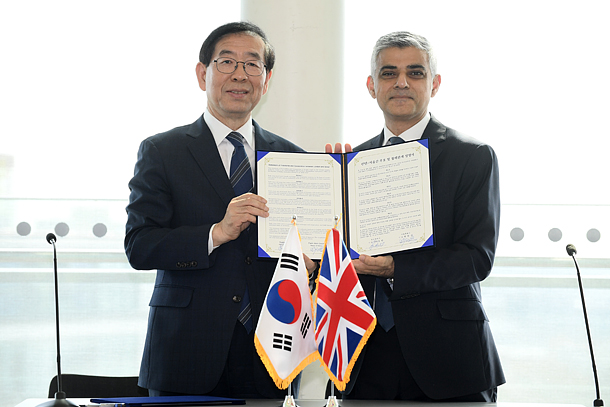 Seoul Mayor Park Won-soon and his London counterpart, Sadiq Khan, signed a memorandum of understanding Monday at London City Hall, promising that the cities would cooperate closely on tackling climate change and promoting social justice and digital connectivity. They also will collaborate as Seoul hosts the World Cities Culture Summit in November.

“Both cities shall use reasonable endeavors to cooperate in the fields of arts, culture and tourism,” the agreement said. “In particular the cities will work closely on the development of the World Cities Culture Forum, with Seoul being the host for 2017, and will continue to make reasonable efforts to engage in international forums and conferences hosted by the other city.”

It was hosted for the first time in London in 2012. Istanbul hosted in 2013, Amsterdam in 2014, London in 2015 and Moscow last year. The World Cities Culture Forum is convened by the U.K.-based BOP Consulting.

Some 100 cultural experts will gather in Seoul in November to discuss ideas under the summit’s topic, “The Creative-civic City: By the citizens and for their Happiness,” according to the Seoul city government.

The Greater London Authority and the Seoul Metropolitan Government also agreed to share knowledge on low carbon innovation and solutions, best practices on diversity, fair pay and employment rights, and provide support to innovative businesses that wish to invest in each others’ cities.

Park visited Paris, Vienna and London from March 28 to April 4 to share Seoul’s experiences in working on climate change and promoting growth.