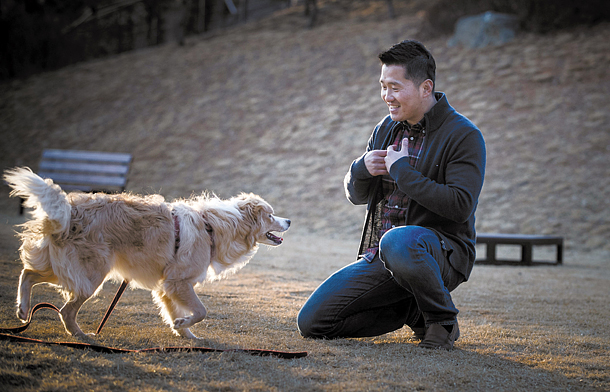 At the training center located north of Seoul, Kang Hyeong-uk works with a dog. “I don’t like the word train. Playing with a dog is also education,” said Kang. [KWON HYUK-JAE]

In just a few commands, he can turn mischievous puppies that bark frantically into loyal and obedient companions.

Dog trainer Kang Hyeong-uk, 32, also known by the name Hunter Kang has earned fame appearing on the EBS show “There’s No Such Thing as a Bad Dog,” where he gives advice to dog owners who are having trouble educating their rebellious pets.

Kang wanted to be a dog trainer when he was in middle school, and is a high school graduate. He has been through thick and thin with dogs since he was a little boy. His father operated animal centers, where dogs were sold and purchased, and dog fighting and hunting occasionally occurred. But his family was not that well-off. “I have never seen my father give us living expenses,” said Kang. Upon entering high school, Kang told his mother that he would make a living looking after dogs. His mother shed tears as she had nothing to give him.

As the number of pet owners is on the rise, his platform is growing larger than ever. JoongAng Ilbo, an affiliate of the Korea JoongAng Daily, visited his training center north of Seoul, for an interview.

The training center located in Gyeonggi, north of Seoul. It is equipped with facilities that owners can use to train their dogs. [JOONGANG ILBO]

Q. The newly built training center looks nice. Did you earn a lot of money?

A. We got this place last November. And no, I haven’t earned enough money to purchase buildings. I can barely pay the rent. This is a place where dogs and their owners can train and study. About 20 lessons are conducted each week, with about seven teams participating. The company’s headquarters is located in Jamwon-dong, Seocho District, in Southern Seoul.

Your nickname is “Dog President”. Do you like it?

I’m flattered, but it is too much of a burden. The president is not a word you would want to be associated with these days. Plus, the president can’t run again (laughs). I can’t be compared with the president.

How do you get violent dogs to follow their owners?

I try to motivate and give hope to the owners, telling them that if they follow my rules, their dogs can improve. Whenever I visit someone else’s house, I make myself at home. I let the dogs sniff me and if they act violently, I block them from biting me. I think following my pattern and my rules is important.

What would you say your technique is?

I prioritize safety the most. I give the dog the impression that they are safe with me. When they feel comfortable, they get curious about their surroundings. This is when I start to bond with them, calling their names and playing around with them. I think the real problem occurs when the owners don’t follow my rules. There is a saying ‘What goes around comes around’. If the owner changes their behavior, so does the dog.

I guess it’s not that different from human relationships.

That is what a lot of older people who have a lot of life experience say. I didn’t realize that at first. I think the same goes with other animals as well. Dogs have taught me more about the world than people.

If you were to compare yourself to a dog, what breed would it be?

(Laughs) I think in terms of personality, I am a Jindo dog. Jindo dogs are sensitive and don’t change much. They know their limits and try to improve. They have a cheerful disposition. But in terms of appearances, I want to be a German shepherd. They look elegant and imposing. But that is just my wish - I am not that tall or good looking. 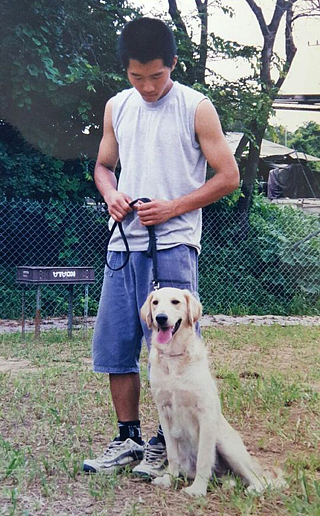 Kang started his career as a dog trainer when he was 17, at right. “I consider myself to be lucky. There are a lot of people who are more talented than me,” said Kang.

When did you decide you wanted to train dogs?

I still remember the date - December 24, 1999. I worked at a training center for guide dogs who help disabled people. I was in charge of all the arduous tasks. Two years later, I started working at a training center for police dogs, because I thought that looked cool. After I served in the military in 2005, I studied at training centers in Australia, Japan and Norway. I never had trouble deciding what I wanted as a career.

Would you say dogs take up 80 percent of your life?

I began volunteering with abandoned dogs when I was in 5th grade. I purchased dog magazines even when I couldn’t afford it. My mother got angry at me, so she threw them away. I even looked for the magazines in local junk shops, hoping I could get it back. Before then, I thought that dogs took up 120 percent of my life. Nowadays, I guess they take up about half of my life. I think I owe my success to a lot of people. I am trying to make use of the chances given to me as best as I can.

A lot of people are not keen on the idea of forceful training.

Pets are not properties, toys or robots. They have feelings too. In the past, a lot of the training focused on the hierarchy among dogs. Humans were deemed as the masters of dogs, so the training was very violent. I think it is time we put ourselves in dog’s shoes. Dogs have emotions too. They can feel pain and stress.

But isn’t that how you were taught to train dogs in the beginning?

That’s when I wasn’t fully mature yet. I just followed what my seniors were doing.

Was there an incident that made you change the way you train?

I adopted a Groenendael when I was 17. My salary was about 50,000won ($44.75) a month, so I saved the money for a whole year. I gave the dog to a friend when I was due for the mandatory military service, but lost touch with him after I was discharged. I am still looking for that dog. We had a special bond. I think it is really lucky when you find a dog like that. I couldn’t train it violently, so I grew suspicious of the existing training methods.

An unemployed person is the best owner for a dog. A homeless person’s dog is much happier than a billionaire’s dog, because they have more time to spend with the owner. Dogs might pray for their owners to lose their jobs. With the rise of the population who live by themselves, pets are also on the rise. But, think of the dogs that have to wait in the house for ten hours everyday alone. I am planning to say this on the seminar for future dog owners, that if you are not fully prepared to have a dog, don’t get one. Humans are not the only ones who feel lonely.

You always conclude by emphasizing the importance of taking your dog out on a walk.

I heard that in more developed countries, there are fewer abandoned dogs.

I was in Norway for about 13 weeks for training, and I did not see one abandoned dog. If the public’s awareness of animal rights is heightened, social welfare policies can be reinforced as well. In the future, I hope to work in fields related to welfare for child and senior citizens. 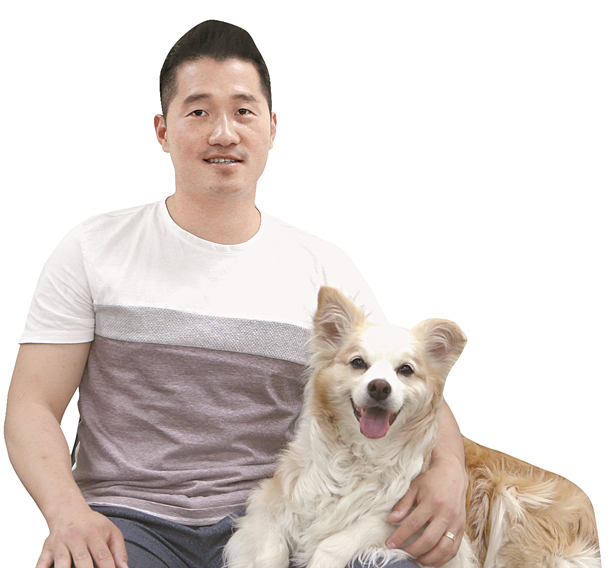 When they are away from their owners, dogs often suffer from separation anxiety. If dogs believe that their owners are coming back, they will remain calm. Kang made up a rule called “Bodeum 5-10-7,” named after his company, and suggests that dog owners follow this tip. He explained that if you follow this rule for five seconds, ten times a day, for seven days, you can see a great improvement.

It is a simple rule. First, you step away from your dog for five seconds. Then, you stare at your dog for about three minutes. There is no need to pet your dog, just make sure they are aware of your existence. Repeat this step ten times a day, for about seven days. Instead of repeating this step constantly, you should only do it from time to time.

“Separation anxiety can be cured. With patience, you can see the improvement,” said Kang.