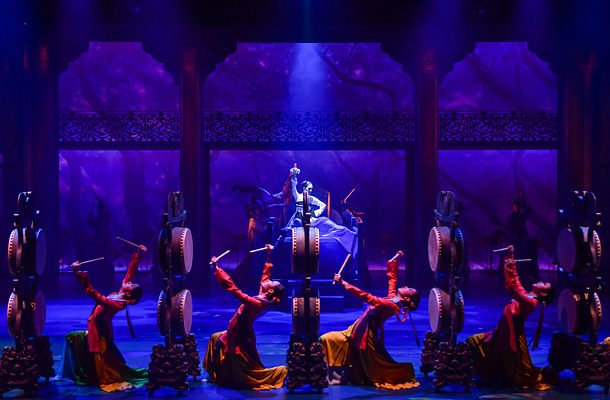 The cast the Korean traditional dance drama “Lotus, a Flower Comes out Once More” perform the highlight scenes at the Jeongdong Theater on April 6. [JEONGDONG THEATER]

Traditional performances are often accused of having complex and outdated plots that make them hard draws for large audiences. The newly introduced production of the traditional dance drama “Lotus, a Flower Comes Out Once More,” took those perceptions into consideration and added modern touches to its show.

At Jeongdong Theater, located in Jung district, central Seoul, on April 6, the director of the theater, Son Sang-won, explained the theater’s new marketing strategy. “Whereas in the past, we focused more on Chinese group tourists, we are now looking out to individual visitors, especially young people.”

To appeal to younger audiences and to add a global flavor to the traditional performances, K-pop boy group Highlight were named the ambassadors for the theater. They are already attracting attention, especially overseas, as a promotional video featuring them has over 60,000 views.

This performance revolves around a love triangle involving Seo-ryeon, the best dancer at the court, whose exceptional beauty leaves even the king enchanted. Jealous of her being in the palace, the queen kicks her out. Dodam, the top general, known for his martial arts skills and chivalry, also has feelings for Seo-ryeon and they confirm their love for each other under the cover of night. The furious King seeks her to take her back to the palace with his army, and Dodam duels the king for Seo-ryeon.

This performance is based on two traditional folktales - the “Wife of Domi,” which is a story from “Samguk Sagi,” a history book from the Three Kingdoms Period (57 B.C. - A.D. 668), and “Igongbonpuli,” a shamanistic narrative from Jeju.

The “Wife of Domi” is about the love of a married couple who defeat the king’s greed, and the second folktale revolves around the revival of a woman, who died after her arduous life of a being a servant, by her husband and son.

The performance consists of no dialogue from the actors. “This can also be a selling point to foreigners as well, since they can easily relate to the performance, and enjoy the multi-colored side of Korean tradition,” said Son. The performance features four songs with lyrics, such as “Heonhwa-ga” which adds a musical element to the show.