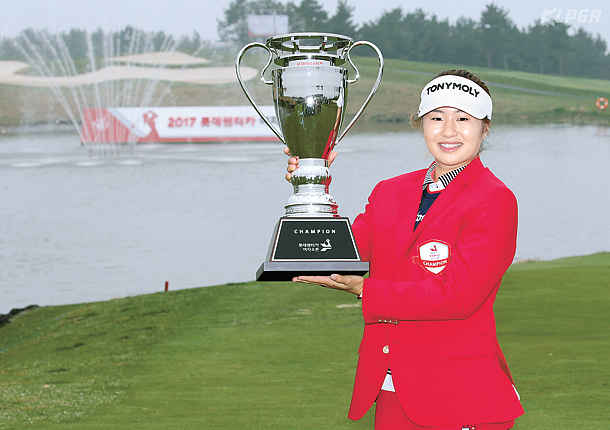 Lee Jeong-eun captured her first win on the KLPGA Tour with a wire-to-wire victory at the Lotte Rent-a-car Women’s Open at Sky Hill Jeju Country Club on Sunday.

After shooting three rounds of 66, Lee concluded the tournament at 18 under par, 198, four shots ahead of Park Seong-weon with 14 under par, 202.

Lee started her final round with a two-shot lead over Kim Char-young and hit a birdie on the first hole. Her victory was almost certain after the front nine, where she scored 31 with five birdies.

She made her first bogey of the day on the 13th hole, but it did not prevent her from capturing the title, as she still held a four-shot lead with five holes to play. A final birdie on the last hole, and the trophy was hers to take.

“I’m glad I got to achieve my goal of winning a tournament this year earlier than expected,” Lee said after the final round. “My next goal for the rest of the season is to finish top 10 in the money ranking this year.”

As a rookie last year, Lee struggled to win a single event on the Korean tour. This time, it took her just two to capture a title. Based on her play over the weekend, Lee had 90.74 percent greens in regulation while averaging 28.67 putts. The win puts her second in this year’s money ranking.

Lee’s final score of 18 under par was good enough for a victory, but since she wasn’t able to get her scores down starting on the 13th hole, she was two shots shy of setting a new KLPGA record of 20 under par.

In 2016, Lee was named rookie of the year for her consistent play throughout the season despite not winning a single tournament. She managed to finish 13th in average scoring, 71.68, and 16th in greens in regulation at 73.67 percent. On the money list, Lee was 24th, making 26 cuts out of the 28 events she played.

After completing the season, Lee went to Thailand for offseason training, where she focused heavily on shots within 100 meters (110 yards), her weakness throughout the season. Lee said her play improved significantly after she strengthened her wedge game before the start of this year’s season.

At the Lotte Rent-a-car Women’s Open this weekend, Lee So-young, who competed against Lee Jeong-eun for rookie of the year last year, finished tied for third at 13 under par, 203.

Kim Char-young, who was one of the top three money earners in 2012 with three wins, ended up finishing tied for fourth with a par score. She started the final round just two shots behind Lee Jeong-eun but quickly fell behind.

Since there were no LPGA Tour events this weekend, many competitive golfers from the U.S.-based tour were trying their hand in the Lotte Rent-a-car Women’s Open, all the more impressive then that Lee managed to top the event.

Kim Hyo-joo, winner of the tournament in 2012, shot two under par on the final day to finish tied for fourth at 10 under par, 206. Jang Ha-na, who won the ISPS Handa Women’s Australian Open in February, finished tied for seventh with nine under par, 207.

The title has earned Lee an exemption for the Lotte Championship next year. The tournament, which was supposed to be played in a 72-hole format was recently switched to 54 after the first round was canceled due to rain.

Up next on the KLPGA Tour is the Samchully Together Open at 88 Country Club in Yongin, Gyeonggi, which starts on Thursday.