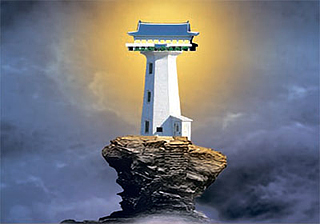 Korea had 26 commercial banks at the end of 1997, when the country was teetering on the brink of default over a liquidity crisis. That number has since decreased to 12. Some of the first-generation bank names — Chohung, Commercial, Korea First, Hanil and Seoul — have disappeared, either merged into other banks or sold overseas.

The survivors grew bigger. Their assets on average more than tripled to 300 trillion won ($264 billion) as of September 2016. The four major banks — KB Kookmin, Woori, Shinhan and KEB Hana — each hold a whopping 280 to 301 trillion won in assets. They are no match against global banks, but they are nevertheless of respectable size.

Their competitiveness is a different story. Return on assets is a major indicator of how profitable a company is relative to its total assets. The average returns of the four big bank stood at 0.53 percent as of 2015. A broader score for all banks was 0.37 percent, far below the 0.8 percent average in the world’s top 100 banks. U.S.-based Citibank and the Industrial and Commercial Bank of China have a return rate above 1 percent. Korean banks’ performance reaches just about two-thirds of their global counterparts.

A closer look places them even more unfavorably. Returns from interest on loans make up 86.7 percent of their total earnings, sharply higher than the United States’ 60 percent and 70 percent in Japan. Korean banks mostly earn money through the basic practice of charging more for lending than deposits. They are like loaches in puddles.

But their peaceful pond has been disrupted by newcomers.

“It’s pretty much scary,” said Kim Do-jin, president of the Industrial Bank of Korea. The new arrivals are physically invisible because they exist only on the internet. They’re a new breed of bank resulting from the marriage of information technology and financial services. They feed and expand through the limitless and boundless worldwide web. They do not require brick-and-mortar locations or staff. They are open around the clock and all year. In order to keep customers from migrating, traditional banks may have to adjust their 9-to-4 hours and five-day workweek.

Internet banks have been in business for a good decade in the United States and Japan. Korea is 10 years late despite its high internet penetration and superfast infrastructure. We cannot be certain if internet banks will be a game changer. They do not pose an immediate danger to traditional banks, and existing players have the upper hand in infrastructure, risk management and asset reliability.

It doesn’t look like customers will suddenly pull their money out of traditional banks and park it online for slightly favorable rates. The internet banks won’t be able to expand if regulations continue to limit the stake that non-financial companies can hold in the banks, which is currently 10 percent equity and 4 percent voting rights.

But every journey starts with baby steps. The Korean financial industry will get nowhere if it does not venture into new enterprises. Local banks won’t have any problem sustaining their business by keeping to their existing practices. Under the current structure, though, no bank can diversify or venture overseas. In the World Economic Forum’s recent review of financial market maturity, Korea was on par with Uganda.

Every five years when a new president is elected in Korea, bank heads are replaced as the government influences appointments in financial groups and banks that are more or less ownerless. We cannot expect a CEO seated by the government to be adventurous and bold in bank management. A couple of new arrivals cannot change the habitat under this structure. They must have the strength to change the playing field.

A new paradigm has entered the market. The existing players must be motivated to evolve and fight the new environmental challenges. Only then can Korea’s financial habitat become stronger.