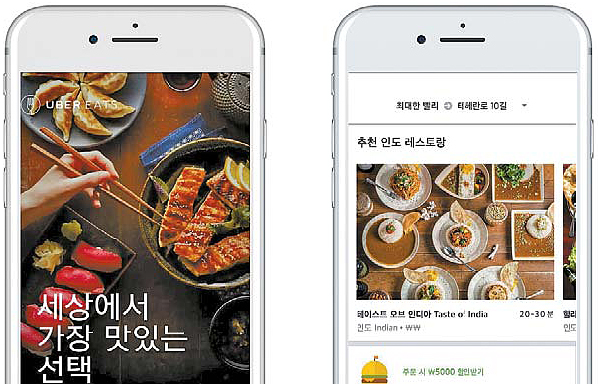 Uber, best known for its global ride-hailing app, is preparing to launch its food delivery service UberEats in Korea, though the company has yet to reveal the exact date.

Uber Korea said in a statement Monday that the company was receiving applications from restaurant partners and people seeking to work as delivery staff. The service will be based on the same technology used for its flagship ride-hauling app UberX. Just as users can track where drivers are coming from and when they will arrive on UberX, UberEats will let users order food and follow the delivery process all in the app.

“UberEats is a global app and is therefore available for use in multiple countries with a single app,” the statement said. In fact, this is UberEats’ strong point compared to other locally-based delivery apps like Baedal Minjok and Yogiyo, of which serviced restaurants are confined inside borders.

UberEats first began service in the United States last March and is currently operating in over 50 cities around the world. Unlike local apps whose delivery staff is hired by contracted companies, UberEats allows any individual to work for the service as long as certain criteria are met. According to the Korean website for UberEats, these criteria include a minimum age of 18, a driver’s license and car insurance.

After downloading the app, they then receive a delivery bag and can immediately start work. The site notes that delivery staff can work any time they want, allowing them to organize their own schedule, similar to UberX drivers.

Uber’s various businesses in Korea have met obstacles in the past. Its ride-hailing service UberX entered Korea in August 2013, but less than two years later, the government shut it down after protests from local cab drivers. The premium service Uber Black is the only remaining service.

UberEats faces tough competition in Korea, where mobile apps for food delivery are abundant. Market leader Baedal Minjok has been around since 2010, and Yogiyo started in 2012. Uber will be entering an already crowded field, and will have to overcome its bad rap from the UberX backlash.