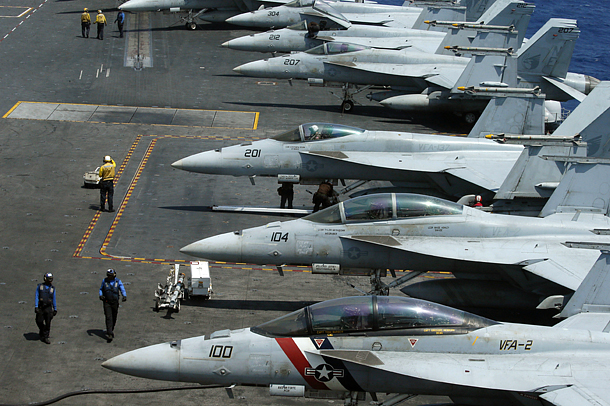 A row of F-18 fighter jets on the deck of the USS Carl Vinson, which is moving toward the Korean Peninsula after North Korea’s recent ballistic missile tests and continued pursuit of a nuclear weapons program. [AP/YONHAP]

Jitters about a possible military engagement on the Korean Peninsula this month are intensifying. Rumors are spreading on the internet and social media that North Korea could carry out another nuclear test or launch a ballistic missile, prompting a preemptive strike on its nuclear and launch facilities by the United States.

The much-anticipated summit between U.S. and Chinese Presidents Donald Trump and Xi Jinping ended without a breakthrough on the North Korean issue. The two bypassed the usual joint press conference after the summit meeting. Secretary of State Rex Tillerson told reporters that Trump had told Xi, “We would be, and are, prepared to chart our own course if this (North Korean issue) is something China is just unable to coordinate with us.” He said that the U.S. strike against Syria over its alleged use of chemical weapons that overshadowed the summit talks with Xi were a warning to North Korea and others that “a response is likely” if they pose a danger. Trump sent a U.S. Navy strike group toward the Korean Peninsula while reiterating that all options including a preemptive strike were on the table.

The option of bombing military sites in North Korea is not a new idea. Former U.S. President Bill Clinton seriously reviewed the option of striking the Yongbyon nuclear facility in 1994, but was dissuaded by strong opposition from President Kim Young-sam in Seoul. But this time, Washington may not dither if Pyongyang poses a direct danger to U.S. interests and citizens with its advancement in nuclear warheads and long-distance missiles.

Most analysts agree that North Korea has nearly perfected its nuclear and missile capabilities. At this point in time, the leaders of both the U.S. and North Korea are unpredictable. If Kim Jong-un precedes with another missile or nuclear test, Trump could order a strike as he did on Syria to teach him a lesson. Soon after Xi Jinping returned home, the Pentagon sent a Navy strike group toward the Korean Peninsula amid expectations that North Korea could carry out a ballistic missile launch or similar military provocation to coincide with the April 15 birthday of North Korea’s founder Kim Il Sung. U.S. Vice President Mike Pence is scheduled to arrive in Seoul, his first stop on an Asian trip, on April 15.

Military experts are skeptical of airstrikes on North Korean military facilities. Its nuclear and missile facilities are spread out across the country and hidden. Attacks on confirmed sites may not be very effective. Moreover, many of them are along the borders with South Korea and China.

A U.S. strike could lead to war. South Korea may not be able to avoid casualties from North Korean retaliatory attacks on U.S. military sites in the south — or on Seoul itself. Lives of thousands near the border also are at risk from advanced artillery in the frontline units.

A preemptive strike on North Korea, therefore, carries unacceptable risks. It must not be implemented without thorough planning and preparation. It is also impossible without prior consent from South Korea and close cooperation between allied forces. Japan also must support it along with China. Foreign residents in Korea would have to be notified in advance. All these procedures cannot be carried out discreetly. A preemptive strike, therefore, is a declaration of war.

Proponents argue for a preemptive strike to remove the danger before North Korea masters technologies for intercontinental ballistic missiles that can reach the U.S. mainland. But the idea is reckless and utterly dangerous. The U.S. cannot pursue a risky mission in which the outcome would be obviously catastrophic for South Koreans: war on the Korean Peninsula. No sane administration in Seoul would agree to the idea. Voices of reason with military expertise like Defense Secretary James Mattis and National Security Adviser Herbert McMaster also would oppose.

The North Korean nuclear problem cannot be left unattended. A reasonable and practical solution is to ease tensions through freezing missile and nuclear developments and capabilities and making reconciliatory arrangement among the two Koreas and the U.S. toward the ultimate goal of lasting peace and denuclearization of the Korean Peninsula.

That process would call for the acceptance of North Korea as a nuclear-armed state. Until the denuclearization process is in motion, there may be a need to establish nuclear weapons capabilities in the South for a mutually assured destruction equilibrium. Deployment of tactical weapons for joint management with the U.S. could be an option.

It is true that peace cannot be sustained without the resolution to go to war if absolutely necessary. But military conflict is best avoided. Provocations should be responded to in proportion. It makes no sense to jump from the pan into the fire. A preemptive strike spells disaster for all. We must do all to avoid it.