Toyota unveils Prius Prime, a hybrid with a larger battery

Toyota unveils Prius Prime, a hybrid with a larger battery 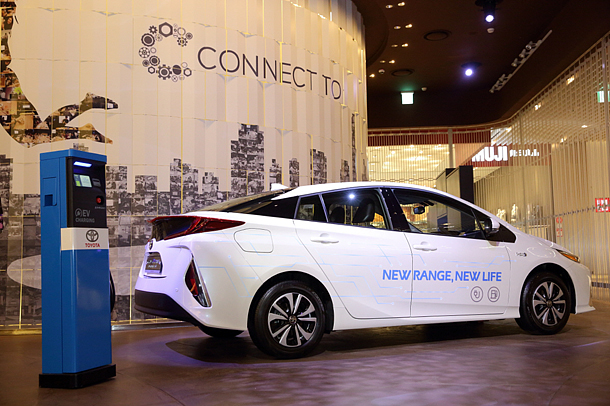 Toyota unveiled a plug-in hybrid version of its flagship eco-friendly Prius in Korea on Tuesday.

Dubbed the Prius Prime, it is Toyota’s first plug-in hybrid electric vehicle to launch in the country.

“Prius Prime is a car that added plug-in function to the fourth-generation of hybrid Prius,” Akihisa Yoshida, CEO of Toyota Korea, said Tuesday at a media event at Lotte World Mall in southeastern Seoul.

“We will continue to fortify the hybrid lineup in terms of quality and quantity this year,” he added.

Toyota said it implemented a “gas injection heat pump auto air-conditioner” to enhance battery efficiency. The system allows the car to utilize the outdoor heat for the car’s inside. Other battery-operated cars have to heat up water for warm air, a drain on battery life.

“It is hard for battery-equipped vehicles to secure a heat source,” said Kaneko Shoichi, the chief engineer at Toyota Motor in charge of developing Prius Prime. While using an air-conditioner jeopardizes the fuel efficiency of internal-combustion vehicles, it is the heater that exploits the battery’s driving distance for eco-friendly cars, the engineer added.

However, with the new system, the driver doesn’t have to worry about rapidly decreasing driving distance, even with the heat on.

“We use the external heat for heater and use gas injection if the outer air goes below minus 10 degree Celsius,” he added.

The car implemented a “dual wave rear window.” The new design doesn’t have a wiper but is designed to enhance fuel efficiency with its aerodynamic feature.

Prius Prime is priced starting at 48.3 million won ($42,130) before government subsidy, about 10 million won higher than the Ioniq PHEV.

“Depending on the customers’ request, Toyota Korea will offer installation of charging stations at their homes. If not, they can use the charging stations set up at Toyota showrooms. The preparation is all done,” said Kang Dae-hwan, sales and marketing director.