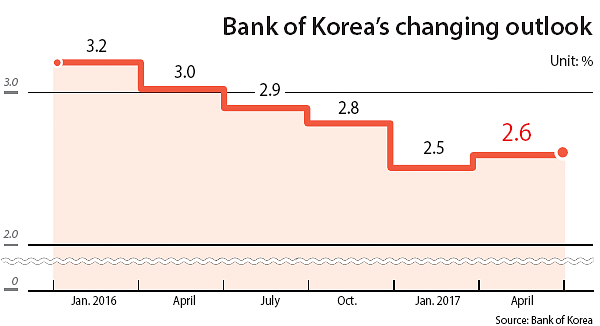 The Bank of Korea raised its economic growth forecast for the year to 2.6 percent from its previous projection of 2.5 percent and held its benchmark interest rate during a monetary policy meeting on Thursday.

It was the first upward revision in three years.

“Despite shrinking domestic consumption, we have raised the growth outlook due to great performance in the tech industry,” Lee said. “Tech conglomerates have bumped up facilities and equipment investment and will keep on planning follow-up investments going forward.”

The central bank chief also noted that GDP in the fourth quarter last year went up by 0.1 percentage point.

Lee went on to say that consumer sentiment improved after a court decided to remove President Park Geun-hye from office following months of political uncertainty regarding her fate.

In January, the Bank of Korea cut its outlook for GDP growth this year to 2.5 percent from a previous projection of 2.8 percent as a prolonged global trade slowdown and weak exports seemed like a real possibility.

Analysts caution that the 0.1 percentage point increase should not be interpreted as a signal of robust economic recovery overall.

“The revised projection is mainly due to the revised GDP reading in the fourth quarter,” said Lee Mi-seon, a fixed income analyst at Hana Financial Investment, “so we need to look for another hike to ensure a strong track of economic recovery,” adding that the country’s economy will likely achieve 2.6 percent growth based on an analysis of previous GDP data.

The central bank’s revised growth projection is in line with forecasts made by the Ministry of Strategy and Finance and the International Monetary Fund, but remains higher than forecasts from most economic research institutes.

On Thursday, the Bank of Korea also held its benchmark interest rate at a record-low 1.25 percent as soaring household debt and possibility of capital flight have made it difficult for the bank to cut or raise rates.

Lee made clear that the central bank would maintain an accommodative monetary policy stance in the long run, though he noted the diminished need to execute a rate cut right away.

“Given the path of economic growth and consumer prices, the need to cut a rate has been reduced compared to before,” he said.

But this doesn’t necessarily mean the Bank of Korea will pursue the trend of raising rates like the U.S. Federal Reserve.