Clean air is a basic right

Clean air is a basic right 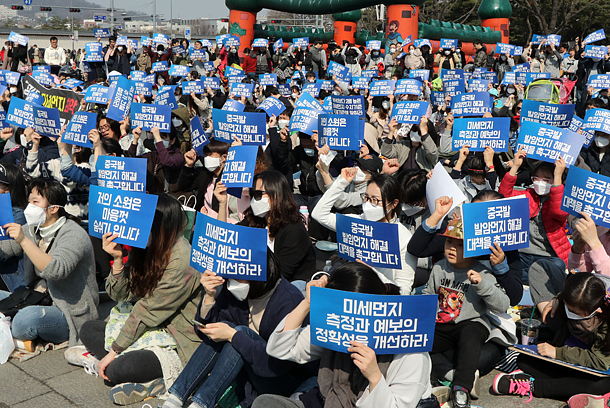 Members of a civic group rally at Gwanghwamun Square in Seoul on April 2 to urge the government to deal with fine dust pollution from China. [YONHAP]

I’ve been to Bangkok. The sizzling heat, the endless traffic, the noise and smell of vehicle gas mixed with street food was horrid. Still clear blue skies and greenery were a comfort. The leisure of cold beer in an exotic environment was a pleasure.
The pleasant feeling ended upon arriving at Incheon International Airport. The skies were murky and gray. Growing under such conditions, what color would our children associate with the sky? Would the sky be blue to them? Since when have our lives begun to be dominated by fine dust and concerns about the air quality?
I looked up data. The frequency of certain news mirrored today’s reality. When I hit the key word “fine dust” in the data search engine of the Korea Press Foundation, related coverage on newspaper and TV news from Jan. 1, 1990 to April 12, 2017 exceeded 46,000 items. From 1990 to 1994, articles averaged 6.4 per year. Annual coverage did not exceed 80 in late 1990s. Reports on fine dust from each 16 media outlets numbered no more than five.
Fine dust started to gain a spotlight in the media in the 2000s. Annual average media mentions reached 360 items in the early 2000s and jumped to 800 by the late 2000s. The number surged to an average of 5,000 from 2010 to 2016 and more than doubled to 13,200 last year alone. Fine dust exposure in the media expanded 6,600 times from two cases in 1990. It would be dominant news if we count the coverage and mentions from more than 4,600 media outlets offline, online, TV, and mobile platforms.
News, like the human life cycle, is born, bred, recedes, and becomes extinct. The power abuse scandal related to Choi Soon-sil, a longtime friend of former president Park Geun-hye, will be forgotten one day regardless of the shockwave it has brought on the country. Few themes like fine dust have survived two decades. Korea inevitably has become chained to fine dust news. Fine dust is dubbed as a silent killer. We live in fear and anxiety not knowing how much of the fine particles gather in our lungs. The state has spent nearly 2 trillion won ($1.8 billion) to combat fine dust. But the threat and damages have worsened. One day, nose masks and air purifiers won’t be enough. We may have to venture outside in gas masks.
Authorities largely blame China, claiming half of the pollution from fine dust has migrated from the factory-heavy mainland. But it says nothing about the other half that is homegrown. In another words, if we have the will, we could at least remove half of the pollutants. Last year, the environment ministry pointed to grilled mackerel for spreading some of the fine particles in the air. It more or less is suggesting we have to get used to bad air.
The right of health is the most basic of our rights. The Constitution stipulates that all people have the right to live in a healthy and comfortable environment. If the state neglects its duty to protect civilian’s right to a healthy environment, we may have to demand legal liability. It must take radical measures even if has to block dust clouds from coming across the Yellow Sea, ban mackerel cooking, close coal-fueled power stations, or remove polluted vehicles from the roads. The action lies with the president. The Constitutional Court upheld legislative impeachment against former President Park, concluding she did not have the will to uphold the Constitution. Under the rationale, if the state leader does not have the will to ensure constitutional rights to public health and happiness, he too would have to be impeached and removed.
People are getting weary and angry about living under gray skies and stuffy air. We must not be relieved to see blue skies from time to time. We must stay angry until fine particles are eliminated for good. If you ask me, I would cast my ballot for a candidate who promises to fight the fine dust until the end. The color of the sky should stay blue.
JoongAng Ilbo, April 15, Page 26
*The author is an editorial writer of the JoongAng Ilbo.
Ko Dae-hoon