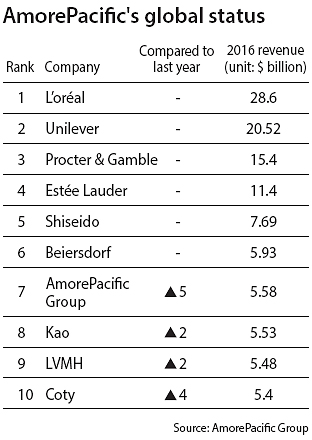 Last year, LVMH was 11th, and AmorePacific was 12th. AmorePacific Group’s five-step catapult was the biggest jump among companies listed in the top 10 this year.

The list released annually by Women’s Wear Daily is based on each company’s earnings report. The evaluation solely focuses on beauty products and excludes revenue generated from non-beauty segments like soap, toothpaste and other products commonly manufactured by cosmetics makers.

L’Oreal, a French cosmetics giant that handles brands like Lancome, Biotherm, Kiehl’s and Shu Uemura, took the No. 1 spot for the 11th straight year.

This is AmorePacific’s first year in the top 10. The leading Korean cosmetics company last year generated $5.58 billion, an 18.2 percent year-on-year jump. The company attributed the growth to five of its most popular brands, Sulwhasoo, Laneige, Mamonde, Innisfree and Etude House. In particular, Innisfree, sold as a nature-friendly brand in the low-to-mid price range, generated 1 trillion won ($880 million) last year.

AmorePacific also diversified its global business last year in China, the United States and Southeast Asia. The cosmetics company said it will further emphasize the Southeast Asian region in the near future to lower its dependence on the large Chinese market as political tension between Korea and China over a U.S. missile shield have affected trade between the two countries.

AmorePacific said it will target mature markets like Singapore, Malaysia and Thailand to build on its brand recognition and plans to newly expand to emerging markets like Vietnam, Indonesia and the Philippines.

For the Middle East region, another emerging market in the cosmetics business, AmorePacific said it will launch Etude House, one of its low-priced brands, within this year. It started a local corporation in Dubai last year.

“I feel honored to list in the top 10 list to represent Korea,” AmorePacific Group CEO Suh Kyung-bae said in a statement. “AmorePacific has grown based on distinctive brands, continuous investment in technology and localized business strategies in overseas markets.”