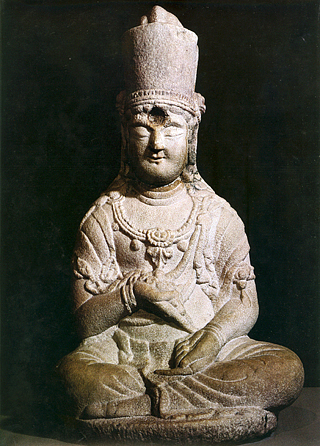 Originally kept at the Hansongsa Temple site in Gangneung, Gangwon, this white marble piece was taken to Japan in 1912 and returned to Korea following the signing of the Korea-Japan Treaty on Basic Relations of 1965.

It is in relatively good condition, except for evidence of a reattached head.

The statue wears a tall, cylinder-shaped crown, with usnisa (a protuberance symbolizing supreme wisdom) atop the crown.

The right hand holds a lotus branch up to the chest. The forefingers of both hands are extended outward. The right foot is behind the left one. These foot positions are the opposite of its twin (Treasure No. 81) found at the same temple.