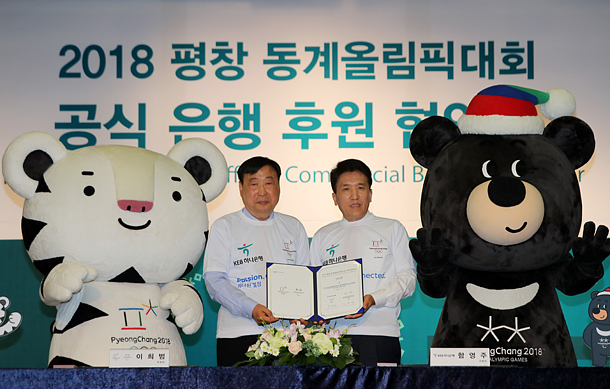 From left, Lee Hee-beom, president of the 2018 PyeongChang Winter Olympics organizing committee, and Ham Young-joo, president of KEB Hana Bank, pose for a picture during a signing ceremony in Seoul on Tuesday. [YONHAP] 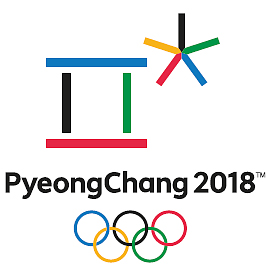 PyeongChang had been struggling to secure sponsorship deals from the financial sector in particular and the banking partnership was selected in an open bid format where KEB Hana Bank had to compete against two other potential candidates.

Upon selection, the Olympic Committee and KEB Hana Bank had been continuously negotiating the sponsorship deals. KEB Hana Bank reportedly offered 11 billion won ($9.7 million) in sponsorships, though PyeongChang had earlier said it sought 15 billion won from its top banking partner.

“Since the agreement was made from difficult situations, KEB Hana Bank’s participation in the Olympics as the main official commercial banking sponsor will be a big help in the Olympics preparation,” Lee Hee-beom, president of the 2018 PyeongChang Winter Olympics organizing committee, said during the ceremony on Tuesday.

As the main banking partner for the Winter Olympics, which is being held in Korea for the first time, KEB Hana Bank will be responsible for ticket sales. The bank will also set up branches across the Olympic venues to serve participating athletes, officials and spectators.

“We will try our best to give the best service at the Olympics and Paralympics, one of the biggest winter sports festivals,” Ham Young-joo, president of KEB Hana Bank, said during the ceremony on Tuesday.

Aside from the financial responsibilities, as the main banking sponsor, the bank is granted various marketing rights, including the usage of the PyeongChang logo in KEB Hana Bank’s advertising campaigns.

KEB Hana Bank had been actively engaged in sports, as it’s been sponsoring the Korean national football team since 1998, hosting the only LPGA tour event held in Korea, the LPGA KEB Hana Bank Championships in October, and have created a professional basketball club in the Women’s Korean Basketball League (WKBL) called the Bucheon KEB Hana Bank.