Bringing royal culture back to life : Festival will recreate ceremonies and rituals from the Korean Empire

Bringing royal culture back to life : Festival will recreate ceremonies and rituals from the Korean Empire 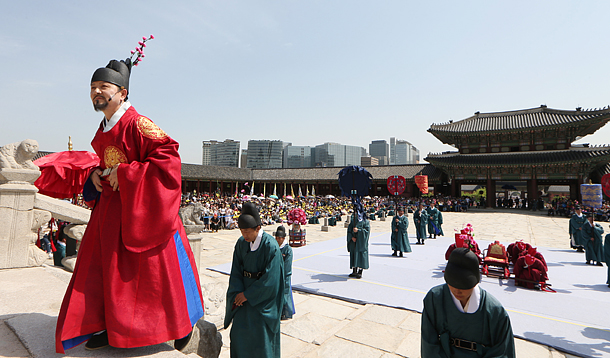 The annual “Royal Culture Festival” kicks off its 10-day run on April 28. Re-enactments of ceremonies, musical performances and food tastings will take place at royal palaces throughout Seoul. [YONHAP]

If you are staying in Seoul during the upcoming nine-day holiday in the first week of May, royal palaces throughout the city are the places to visit.

The annual “Royal Culture Festival” - with a wealth of events like re-enactments of ceremonies and rituals, musical performances and food tastings taking place mostly at royal palaces - will be held between April 28 and May 7.

During the Korean Empire, Deoksu Palace served as the main palace for the emperor and empress, and was also a key center of politics during the period. The palace near City Hall Station will also be the main backdrop of this year’s Royal Culture Festival.

“One of the highlights will be the re-enactment of Emperor Gojong’s coronation,” Son Hyeong-chae, who is in charge of the production, told reporters yesterday. King Gojong (1852-1919) of the Joseon Dynasty declared Joseon an empire hoping such a move would change its fate, and became the first emperor of the Korean Empire.

The re-enactment of his coronation is based on historical documents, according to Son, and will be the first of its kind.

The traditional music performance held in the evening at the Gyeonghoeru Pavilion in Gyeongbok Palace will be a spectacle, as it has been in the past. 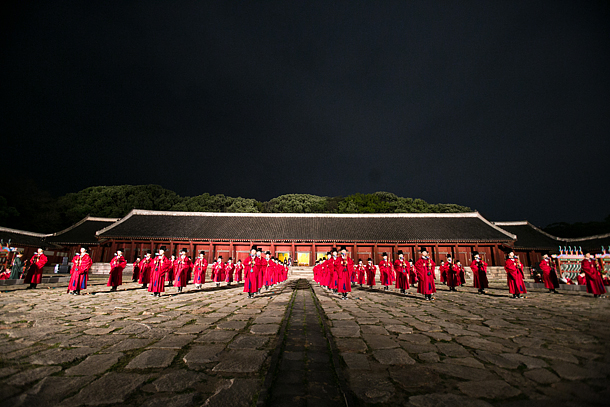 Among the 29 programs will be a nighttime performance of the Jongmyo Jerye, a royal ancestral ritual, at Jongmyo Shrine in central Seoul. [YONHAP]

Another nighttime performance that has been well-received over the years was Jongmyo Jeryeak, or music and dance performed at Jongmyo Shrine, which is a royal Confucian shrine dedicated to the ancestors of the Joseon Dynasty (1392-1910). Jongmyo Jerye, the ritual itself, is inscribed on Unesco’s list of the Intangible Cultural Heritage of Humanity, and this performance is a rare opportunity to enjoy the practice at night.

There are also activities where people can taste food the royals of Joseon ate as well as experience the medical treatments of the time. At Sojubang in Gyeongbok Palace, which served as the royal kitchen of the period, people can try various cuisines made according to royal recipes. In Changdeok Palace, which is where Joseon kings resided the longest, there are programs where oriental medicine experts will diagnose participants just as royal doctors did during Joseon.

According to organizers, about 430,000 people took part in the festival last year. This year, they hope that number reaches 500,000. As many of the programs are re-enactments and performances, there are many actors involved as well. This year, 1,500 professional and non-professional actors will be performing throughout the 10-day festival.

For detailed programs, visit www.royalculturefestival.org. Tickets are available at Auction and Interpark.